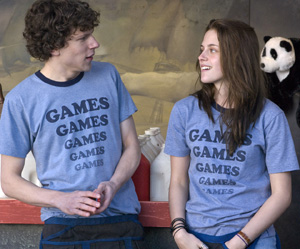 When Superbad hit theaters in 2007, the film created superstars out of Michael Cera and Jonah Hill, a soulful white kid named McLovin, laundry detergent cocktails and a director by the name of Greg Mottola. Since then, audiences have salivated at the mere thought of what this creative filmmaker would unleash next. Now, rabid moviegoers are finally getting their fix with Adventureland.

The comedy stars Jesse Eisenberg (Roger Dodger, The Squid and the Whale) as James. He’s an Ivy League Lit major preparing to venture abroad on a backpacking excursion with a good friend after returning home from college.

James has procured most of the money for his trip and approaches his mom and dad for an advance on the rest. That’s when the ’rents drop the bombshell: Dad’s been demoted at work. As a result, the loan is unceremoniously put on hold, as are James’ plans to return to school in the fall.

Ever the trooper, he sets out to find a good summer gig that will fill his pockets with the necessary dough while calling upon his (somewhat non-existent) skills. Unfortunately, he finds himself in minimum wage hell when he takes a position at the local amusement park called Adventureland. This isn’t your typical home of theme rides and fun attractions; it’s a small mom and pop operation run by a financially strapped couple (played by “SNL”’s undeniably funny players, Kristen Wiig and Bill Hader).

James falls into a routine with the motley crew of employees at the park and even strikes up a romance with Em (Twilight’s Kristen Stewart). However, what James doesn’t know is that Em is as complicated as she is beautiful. She’s been secretly involved in an affair with the park’s repairman, Connell (Ryan Reynolds).

Will she and James be able to find their way to happiness with each other? More importantly, will they be able to survive the insanity that is Adventureland?

Mottola admits that his movie is deeply autobiographical. So much that he jokes about its parallels to his own life with blaring honesty.

“Let me put it this way, the fumbling, embarrassing parts are true,” he says with a laugh.

Adventureland takes place during the late ’80s – a time in which Mottola was a young adult. It unfolds against a backdrop of various sights and sounds of that era, including a soundtrack with tunes by Crowded House, the Cure and even one hit wonder Falco’s “Amadeus.”

“I hope it just feels like an accurate portrayal of the time,” says Mottola.

What’s also unique about the project is how different it is in tone to Superbad. Adventureland is a much more sentimental and dramatic work. Instead of relying on a recipe of physical comedy and bawdy humor, the movie takes its time and blossoms as an intense character study.

Adventureland’s campy setting provided Stewart the chance to enjoy a decade that she wasn’t even alive for the first time around. What are her favorite aspects of the 1980s?

“Madonna or neon colors,” she says with a shy grin.

Eisenberg was also drawn to the era but for a much more heartfelt reason. He likes the innocence of its characters, but isn’t convinced that Adventureland couldn’t take place present day.

“I think all the feelings are the same,” he explains, “it just looks differently.”

Stewart agrees. She heaps a mountain of praise on the interpersonal relationships that develop, particularly Em’s love of James.