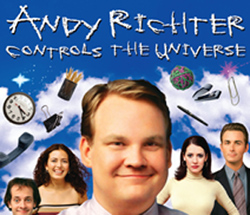 Robbie Coltrane, best known as Harry Potter’s Hagrid and for his British comedy roles, nailed the part of a lifetime with the British crime series “Cracker,” now available in the Complete Collection. The portly actor stars as Fitz, an arrogant, gambling, boozing forensic psychologist brought on to solve the toughest cases. Expertly written, acted and executed, it’s a great series.

With Conan moving to “The Tonight Show” it’s time to revisit his old sidekick Andy Richter in his first show after leaving the “Late Night” couch, “Andy Richter Controls the Universe.” The underrated show ran for only two seasons, but helped lay the groundwork for genre-busting, half-hour comedies like “Arrested Development.”

Richter stars as a struggling short story writer with an overactive imagination who narrates his life working as a technical manual writer, re-imagining his life in absurd “Family Guy”-esque fantasy flashes.

The third volume of the Forbidden Hollywood Collection, Warner Brothers’ popular collections of pre-Code films, features six films by director William Wellman made between 1931-1933. During the Great Depression studios sought to bring in audiences by pushing the envelope with lurid subject matter, from adultery to drug use and prostitution.

Wellman was one of the key directors of the era. These films feature Barbara Stanwyck, Mary Astor and James Cagney. Also included are two documentaries on Wellman featuring Clint Eastwood, Gregory Peck and Robert Redford.

Legendary silent film director F.W. Murnau’s masterpiece Faust gets a deluxe edition release, which includes two versions of the film. One of the great films of the silent era, Faust stars Emil Jannings as Goethe’s Mephisto. Also included is an hour-long documentary on the making of the film.

The Wonders of Nature (Without Having to Get Up)

Two Animal Planet series worth checking out: “Raw Nature” (available March 31), in which filmmakers travel all across the globe to find the most exotic and dangerous animals, from giant anacondas to komodo dragons; a fascinating series not for the squeamish.

“Living with the Wolfman” is a jaw-dropping series with the special appeal of documentaries that make you say, “People actually live like that?” Shaun Ellis has devoted his life to living amongst a wolf pack. Now he’s trying to initiate his girlfriend into the pack by essentially retraining her to think and live like a wolf.

Akira Kurosawa’s first color film, Dodes’ka-den, made in 1970 was a departure for the master filmmaker. It tells the intertwining stories of the people living in a Tokyo slum.

It’s sprawling, episodic, quirky, fantastical and sad. It’s not his best, but does contain moments of transcendence. It also includes a 36-minute making-of doc.

Wong Kar-Wai first garnered international acclaim with Chungking Express. He followed up with two other great films Fallen Angels and Happy Together, available March 31 in new special editions. Both films explore the Hong Kong filmmaker’s usual themes of unrequited love and disconnect in modern urban environments, which he depicts in dreamlike shots of light and color.

One way of filming unfilmable source material is to break it into multiple projects. Watchmen: Tales of the Black Freighter & Under the Hood adapts Alan Moore’s trademark story-within-a-story technique into supplemental animated shorts. Included here are the horrific pirate comic and Hollis Mason’s (a.k.a. Night Owl) tell-all autobiography, which helps fill in some of the backstory. Director Zack Snyder contributed as co-writer/producer.

Wonderful Town, The Inauguration of Barack Obama, I’ve Loved You So Long