Take a Ride on the Wild Side with PAPA ROACH 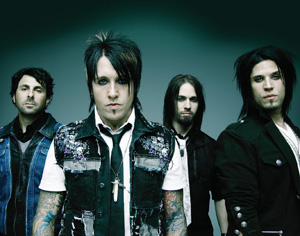 “It is an emotional journey, an adventure,” says bassist Tobin Esperance of the new record. “It takes you on a ride.”

Joined by drummer Tony Palermo, guitarist Jerry Horton and vocalist Jacoby Shaddix, Esperance explains the journey as starting from the first song up through to the last song; listening to it track by track leads up to the feeling of a well-taken voyage once the album is over.

“It’s like you’re going to war,” is one way the album is described by Esperance. “There are vulnerable moments and some aggressive.”

As far as notable differences go regarding the new album, Esperance says, “We have become better songwriters and evolved as musicians.”

Another change is the addition of new drummer Palermo. Forgoing the typical routine audition technique when searching for a new band member, they asked Palermo to join after he had been a temporary fill in.

With a new drummer stepping in, the band had a different playing style to work with and a whole new approach. They had seen Palermo play and were familiar with his skills, but when it came time to actually write and record together, it took some time to work it out.

“There were new things, a need to rebuild within the band,” Esperance says of the approach and direction with making Metamorphosis. “With this record, we had a lot of input.”

The band teamed up with producer Jay Baumgardner once again, previously working with him on 2000’s Infest. The record was finished while the band was still on the road.

When it came time to pre-record the album, they saw themselves back at the Paramour mansion, after using the home as a studio for their previous album The Paramour Sessions. Paramour was an easy choice for Papa Roach as it offered them a getaway from any and all distractions and a chance to reconnect with each other as a band.

The location didn’t hurt either; located on top of a steep hill, with plenty of spectacular views, Paramour seemed like the perfect place. Another reason for choosing the Paramour mansion was that it is “not a conventional studio.” The surrounding worked well for the band as it provided ample time to get everything situated and time to prep for the actual recording of the record.

During their time there they would “jam all day and party at night,” Esperance reveals.

And contrary to popular belief of the place being haunted and possessed by demons, this was not true.

“No ghosts or spirits, unless the spirits channeled themselves in other ways like into our music,” Esperance confides.

Some inspiration more or less around the time of working on the album came from listening to old funk and soul albums, a little Billy Joel and some AC/DC. But mostly the inspiration came from “each other and jamming,” Esperance says.

This all led to the final formation of what became Metamorphosis. With the title referencing a change, and with all that went into the making of it, the end result is one of pulling you in and taking you for a wild, wild ride.