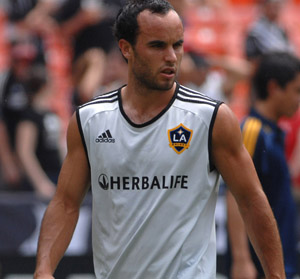 It seems as if Landon Donovan will have another great season like he did in 2008. Donovan, who led MLS with 20 goals last year, scored both goals for the Galaxy on Sunday in their come-from-behind 2-2 tie against the visiting D.C. United.

Both scores came in the last 10 minutes of the match. One was in the 80th minute from the penalty kick spot and the other on a header with four minutes left in regulation.

Inland Empire native Donovan looked stellar in the opener, but questions surround the squad. Los Angeles gave up two goals and was trailing for most of the match until Donovan used his superhero powers to help the team escape a loss.

The Galaxy allowed the most scores last year and looked shaky in their first contest of this season.

The Galaxy will face the Colorado Rapids April 4 at 7:30 p.m. at the Home Depot Center.