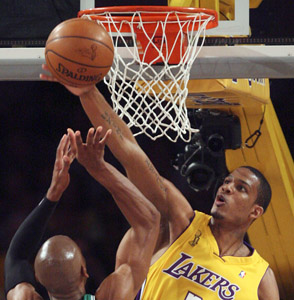 Both L.A. teams are in the midst of an out-of-town series this week.

The 17-53 CLIPPERS began their six-game trip in Detroit (34-35) Friday. In spite of 22 points from Eric Gordon and 19 points and eights assists from Baron Davis, the Clippers picked up their 13th straight loss against the Pistons, 90-108.

The Lakers hosted Golden State (25-45) Thursday night and despite giving up an 18-point lead and committing 22 turnovers, came away with a 114-106 victory. This was the team’s last game at home until April 3.

Their seven-game road trip, their longest of the season, began in Chicago (32-38) Saturday afternoon. The Lakers showed more intensity and energy than in the past few games and came away with a 117-109 victory.

PLAYER OF THE WEEK: TREVOR ARIZA

Despite providing an incredible source of energy off the bench, Ariza has been a great asset to the starting five in place of Luke Walton. His intensity on defense allows Kobe Bryant to roam and disrupt passing lanes more. Over the past three games, he’s averaged 16 points, six rebounds and two steals.