The Amityville Horror: Ryan Reynolds and Melissa George Get Spooked in Film Remake 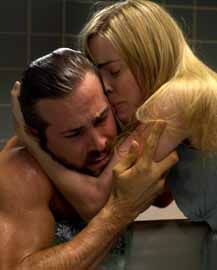 She was referring to the house made famous by the 1979 film The Amityville Horror – soon to be made famous all over again – in the 2005 remake starring National Lampoon’s Van Wilder’s Ryan Reynolds and Melissa George of TV’s "Alias."

Warren went on to say that "the property (112 Ocean Ave.) was used as a sort of insane asylum for Native Americans who were sick and dying. There had been an enclosure on the property, where patients were housed. Inhuman spirits revel in such suffering and are able to infest the graves of those who were buried in unconsecrated ground."

Warren and her husband, a prominent demonologist, visited the home after the Lutz’s fled. Warren said her husband truly believed that the Amityville house was "a house of evil."

In the second production outing for Platinum Dunes, the producers decided to stick with a similar formula that made their first feature, The Texas Chainsaw Massacre, a success: First, take a successful horror movie from the ’70s that is based on real events. Second, shoot a low-budget movie that gets its scares more from its effect on the psyche than from special effects.

"Horror films based in reality strike a much deeper chord [than those based on the supernatural], says producer Andrew Form. "They tend to linger in the minds of movie audiences long after they have left the theater."

There has been debate over the years about whether the infamous house in Amityville was truly haunted. But the facts hold true: On Nov. 13, 1974, Ronald DeFeo, Jr. shot his parents and younger siblings in their beds with a high powered rifle while they slept.

Warren says it was odd that each victim was sleeping on his or her stomach while the crime occurred, and that no one woke up or cried out during the shooting. She believes the DeFeos "were in a state of ‘phantomania,’ which in effect paralyzed them, making them unable to cry out for help."

After his arrest, DeFeo claimed that voices in the house made him do it. Shortly thereafter, the Lutz family moved in, only to leave abruptly after 28 days without any of their belongings.

In addition to the facts on file, producer Brad Fuller interviewed one of the DeFeos’ neighbors. The neighbor wondered why the previously secular DeFeos were suddenly placing religious artifacts in the yard. Ronald DeFeo, Sr. informed the neighbor that it was to "get the devil off my back."

Although the Lutz children have been notoriously silent about their ordeal, producer Brad Fuller said that Chelsea Lutz – the daughter of George and Kathy Lutz – recently made a short statement to the media about having a friend in the house who was, in fact, the deceased Jodie DeFeo.

With a movie carrying this much baggage, the production was bound to have some eerie moments of its own.

The film was shot on a small lake in Wisconsin and, according to everyone involved in The Amityville Horror, a body was found in the lake during the first week of shooting. Not only that, Kathy Lutz died during the second week of production.

Ryan Reynolds and Melissa George play George and Kathy Lutz, roles originally played by the much older James Brolin and Margot Kidder in the original film version of The Amityville Horror.

Producer Fuller explains: "One of the first things we discovered before casting the film was how young the real characters were when these events took place in 1975. George Lutz was only 28 and Kathy Lutz was 30. They played it much older in the original movie, but we wanted to cast the roles true to their actual ages. We also wanted to get actors who haven’t been seen in these kinds of roles before."

For the role of patriarch George Lutz, in stepped Ryan Reynolds who was seen most recently providing comedic relief in Blade: Trinity. He’s also been in the gossip pages for his engagement to singer Alanis Morissette.

Reynolds was eager to show off his acting range in his portrayal of Lutz coming under the influence of the house’s spirits. He also admits that during filming, "lights went on and off in the house during the middle of the night. The security guards couldn’t ever find anybody in the house or explain how it could happen.

Australian actress and "Alias" star Melissa George stepped in to play the role of Kathy Lutz. Beyond Amityville, she will also be seen this fall opposite recent Oscar-nominee Clive Owen and recent tabloid fixture Jennifer Aniston in the movie Derailed.

George was more than happy to apply the butt-kicking skills she learned on "Alias" to her role in the movie.

She also concedes to some mysterious occurrences during production. "Everyone was always falling down inside the house for no apparent reason," says George, "and things would mysteriously disappear. It was also crazy that the house [used in filming] was located in the town of Salem, which is also the name of the town the DeFeos were from."

The producers hope that the film’s reality-based nature will create real scares for audiences.

"The reason this is one of the most famous haunted house stories is because it is based in reality," says producer Form. "It’s a fact that Ronald DeFeo murdered his family for no apparent reason. It’s also a fact that George and Kathy Lutz and their three kids ran for their lives after 28 days of living in the house. Hopefully this film will give audiences insight into what caused a perfectly normal family to be shaken to its core and act in such a manner."

Interviews
James Bond producer: 007 ‘can be of any color’ but never a woman
1,721 views

Interviews
For Martin Scorsese, making ‘The Irishman’ was about ‘learning to die’
1,380 views

Interviews
Maleficent doubts her fitness as a mother. So did Angelina Jolie
984 views