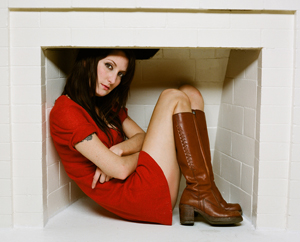 Maria Taylor wants you to be prepared when you listen to her new album, LadyLuck. The former Azure Ray singer suggests listening “in a dark room with a candle or two, with headphones; maybe in the bath but definitely horizontal.”

R.E.M. frontman Michael Stipe contributes guest vocals to the album’s closing cut, “Cartoons and Forever Plans,” while the video for “Time Lapse Lifeline” features lots of Taylor’s friends including Har Mar Superstar, the Donnas, Whispertown 2000 and Tilly and the Wall.

LadyLuck is Taylor’s third solo effort and drops March 31 through Nettwerk Records. Whispertown 2000 will also be along for the ride when Taylor brings her show to the Troubadour May 3.

Michael Jackson has sold 750,000 concert tickets in one day. The reclusive King of Pop will be returning to live performance in London this summer with a new show called This Is It.

Jackson is scheduled to perform 50 times at the city’s O2 Arena, and the shows sold out at a pace that make the tickets the fastest-selling ever in London. Some fans will have to hold onto their precious passes for quite awhile; the first show is scheduled for July 8 but This Is It won’t wrap-up until February of next year.

It’s been hinted that Jackson will not play in London again after this lengthy run. No plans have been announced to bring the show to the States, but fans who want to hold out hope should check in from time to time at michaeljacksonlive.com.

Rhino Records is about to release a three-CD/one-DVD boxed set from Jane’s Addiction called A Cabinet of Curiosities.

The limited-edition set will come housed in a wooden cabinet, and the discs will be packed with all kinds of rarities like an unreleased version of “Jane Says” that was recorded during a 1986 session at Radio Tokyo in Venice. Live versions of Led Zeppelin’s “Whole Lotta Love” and the Stooges’ “1970” are among the more than 40 “curiosities” stored on the CDs, while live footage from a concert in Italy highlights the DVD.

Jane’s is also getting ready to hit the road for a co-headlining tour with Nine Inch Nails that’s been cleverly dubbed the NIN/JA Tour. The tour marks the first time the two bands have shared a stage since they appeared together at the debut of the Lollapalooza Festival in 1991.

A Cabinet of Curiosities drops April 21.

When L.A. street-punkers Left Alone want to be, well, left alone, they know just what to do. The band headed inland to Fontana and spent a month virtually camping out in the studio in order to record their latest for Hellcat.

Frontman Elvis Cortez credits that isolation with helping to shape the self-titled effort’s sound: “This album to me sounds like one full project; each song complements the others. I feel like these are the best I’ve written and have the best production value, and a lot of that comes from going and living in the studio.”

The rural outpost couldn’t have been too tough on the band since it inspired a fun little ditty (and the album’s first single) called “3 Bottles of Wine.” Left Alone officially drops April 7, but the Knitting Factory is hosting the band for a CD release party April 4.