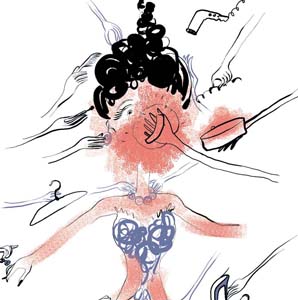 After my quick bathroom break I get back to the door, which I like to refer to as my programming for the night; my TV set. I am programmed to meet, greet and watch people come in and out of this club; viewing them through my little box just as I would a television, only this way I am actually exchanging words, money, tickets and glances with them.

This is literally my television I watch most nights, and although I couldn’t tell you the shows that have been on prime time TV or any other of the current 600 channels on the air for the past six years, I’m sure that what I’ve seen working the door in nightclubs is much more interesting and fun than any reality show or sitcom any night of the week.

Some people at the door, some who are actually on real TV, put on their own show for me, whether they are causing drama or being hilariously funny intentionally or not with their actions or words.

I know it’s Hollywood, where wannabes feel like they should put on a show to impress EVERYONE, because wannabes never know who has the power and pull to “discover” them and make them a star, but those people should know this:

I am only a doorman. I do NOT have that power to make them famous, so they DO NOT need to display their acting skills to try to impress me.

It’s not impressive in front of me and my fake TV, it’s annoying, so if these wannabe actors and actresses aren’t bringing their funny faces and nice attitudes to the door, they better bring their cover charge to get in. Unfortunately, for all of us, bad programming costs money.