KOGI KULTURE: The Little Korean Taco Truck That Could 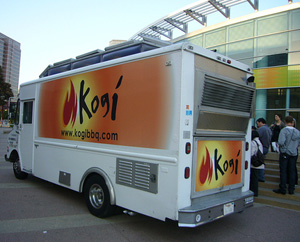 If you haven’t heard about the Kogi BBQ taco truck by now, you’ve probably been living under a rock for the past couple months. Featured in both the LA Times and the New York Times, Kogi has become an underground food phenomenon.

Hundreds of fans flock to the trucks nightly from as far as Orange County to taste juicy, barbecued short ribs, swimming in a marinade of sesame chili salsa, cabbage, cilantro onion-lime relish, sesame seeds and sea salt, all wrapped in a tortilla. But wait, do they really drive all over the city and wait in hour-long lines just to taste Korean barbecue in taco form? Nobody’s waiting two hours for a taco unless there’s some hefty buzz about it.

Kogi owes its success to a new genre of social networking. The food is good, pairing fresh ingredients and sophisticated flavors with a tried-and-true street food formula, but the hype created through a combination of social networking devices is what keeps people seeking out Kogi. By updating their blog daily, notifying of their whereabouts on Twitter and relying on the help of a vast culture of food bloggers, Kogi has become the little Korean taco truck that could.

Alice Shin, Kogi’s PR representative and sister-in-law of founder Mark Manguera, is the first to tell you that Kogi owes a lot to the fans: “The first weekend we rolled out we couldn’t sell a taco.”

Then the Pleasure Palate featured them and it took off from there. Kogi began when Manguera ate a late-night carne asada taco and essentially thought to himself, “Man, this taco would be good with some Korean barbecue in it!” He was right.

Manguera and a small bevy of relatives run the Kogi operation. Chef Roy Choi hails from Koreatown and makes sure to keep Kogi street, capping off the price of a taco at $2. They hardly make a profit, but they know that affordability is key.

“We’re not Baja Fresh; we don’t have a lot of money. When people get angry, it makes us not want to do it.” Shin is referring to some fans’ disappointment when the trucks run late.

“I don’t think they understand how much work gets put into arriving 40 minutes late instead of two hours late.”

She feels bad when fans come from long distances and are disappointed, but there’s only so much she can do.

“We have to do what’s best for Kogi; we want to keep it innovative, fresh and affordable.”

If you want Kogi to hit up your ’hood, make it easy for them.

“I don’t think we would be in Silver Lake today if Silver Lake weren’t such an awesome neighborhood,” says Shin. “They accommodate us; they take the wait and do something really cool with it.”

She is referring to Kogi kulture – what makes it not merely a taco truck but a social movement. Fans in Silver Lake set up lawn chairs, bring their dogs and make a party out of it.

“We try to keep Silver Lake on our schedule because of loyalty like that,” she says.

It remains to be seen whether loyalty to Kogi will waver once the buzz dies down. As they become more seasoned, there are many directions the Kogi vehicle could take. One thing’s for sure; they have successfully capitalized on the social networking generation and created a cultural experience for Angelenos.

“What I love about L.A. is that it’s always trying something new, not to impress, but to experiment,” says Shin.

She attributes Kogi’s appeal to being “predictably unpredictable,” as we all wait anxiously on Twitter for their next move.