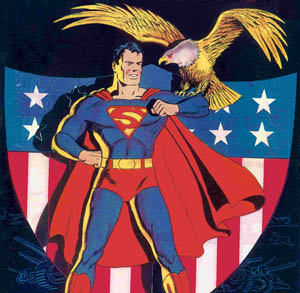 Watchmen, having failed on every level – acting, music, cohesive story, characters you care about, adaptation – deflated any cinematic cache earned for comic books by The Dark Knight. If there’s any chance of the esteem being reclaimed, it’s found in ZAP! POW! BAM! The Superhero: The Golden Age of Comic Books, 1938-1950 at the Skirball.

A Comic-Con worth of objects and original art from private and institutional collections, ZAP! is the closest we’ll get to the promised-but-never-delivered adaption of Kavalier & Clay. Like The Dark Knight, the exhibition explores the early days of Batman, Superman, Captain Marvel, Captain America, Wonder Woman and many others.

Along with vintage artwork and books, there are Hollywood serials, an interactive drawing studio, a makeshift newsstand and half-century old Batman ride. The preeminent hands-on exhibit is a telephone booth that one enters as a lowly, Midwest-born, weak Jewish writer and exits as a strong, foreign-born, muscled gentile. (No, it’s not just biography – Jerry Siegel and Joe Shuster, Superman’s creators, knew the psyche they were tapping into.)

The exhibition states, “In the midst of the economic and political turmoil of the 1930s and 1940s, comic books offered America champions who shaped the values of an entire generation,” but draws no overt correlation between that depression and the present one. Both needed heroes, and the lionizing of Obama – Shepard Fairey’s image as ubiquitous as Superman’s, with the same color pallet – reminds the attendee that, despite what Tina Turner sang and Barbara Kruger codified, we do indeed need another hero.