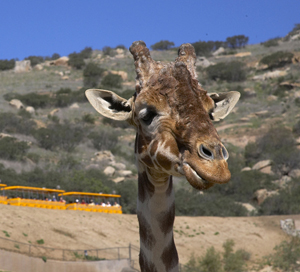 Journey Into Africa and see giraffes!

For some, the very thought of venturing south of the LA-OC Line manifests the same trepidation those first foreign visitors to Africa shivered before stepping into the Old Country. But grab your malaria shots, khakis, Lion King soundtrack and Spanish-English dictionary – it’s time to head deep into the dead brush of Orange County to the Wild Animal Park.

Located about two hours south of Los Angeles – as much time as it takes to travel from Santa Monica to the Burbank-ish LA Zoo – the San Diego Zoo’s Wild Animal Park is a voluminous wildlife sanctuary, home to more than 3,500 animals. The seduction is that the majority of these are not in cages, pens or aviaries, but in an expansive savannah that can only be accessed by tram, truck, Segway or balloon. And, soon, zip-line, where, after ascending a 400-foot mountain, participants can soar two-thirds of a mile over the Asia and Africa field exhibits.

All of these options – at varying prices – provide various levels of access, and views, of the wilds of Africa. All the favorites are here: lions lounging on broken-down trams, giraffes curling their prehensile tongue around branches, a crash of rhinos bulldozing the air.

But bounding around them are hundreds of various other African flora and fauna; wild ox, pronghorn, oryx. For most, it’s the first time a Nile Lechwe has been observed running across grassland without a National Geographic logo popping up in the corner of the screen.

Following the tour, ascend the boardwalk to the Condor Ridge – the only California Condor exhibit in the world – and look back out at the Journey Into Africa – it’s impossible to believe yourself to be anywhere but that continent.

During a time where, for many, taking a trip is financially unfeasible, with a quick drive south, and a day surrounded by warthogs, elephants and lorikeets, by the time you drive back north, your body will feel that inebriated contentment that follows a successful vacation, with pictures, and experiences, that are difficult to place a price on.