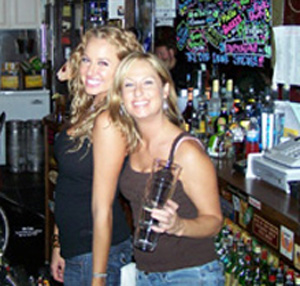 Its façade might give the impression that the joint is closed or home to a biker gang. Its interior is a flashback of old, wooden taverns that are long lost now in the era of neon beer signs and posters. Few boozing joints still survive where you can catch a quick drink after a long day without having to wait in a long line just to get a weak or wrong drink.

As an exception, Whiskey Bend rides in its 45th anniversary as Burbank’s little-known treasure. From the disco era of the ’70s where it was a fire marshal’s worst nightmare by exceeding capacity, to the country vibe it has held for the last 20 years, Whiskey Bend continues to evolve to accommodate the influx of new drinkers who wander in everyday.

The former dance floor is now the stage for darts and people who like to lounge around while karaoke is going on or while they wait for a game of pool at the two pool tables in the far corner.

In addition to its modern facelift of flat screens and fresh vinyl seats, the jukebox has anything and everything to please whatever genre is your preference. It seems the invasion of Internet jukeboxes has claimed another bar, but it plays well to the Whiskey Bend’s advantage.

The music that plays is consistent with the crowd at any given time. During the day it’s impossible to not hear country, while at night, hip-hop and rock dominate.

One of its great draws is the fact that a kitchen was installed a couple years ago. Whiskey Bend’s always been lenient with its patrons bringing in food, but it took the large step in converting its back room into a small kitchen.

Of course, the bar fare offered isn’t all that healthy and your arteries will hate you in the morning along with your liver. One thing that won’t be hurting is your wallet. Just be careful, it’s cash or credit here – no debit.

Bottoms Up
Oktoberfest: (Micro)Brew Up Some Fun
2,545 views

Bottoms Up
Dive Bars: Good ’til the Last Drop
2,890 views