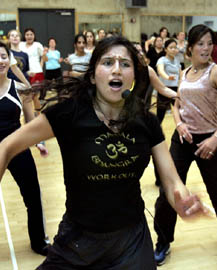 Jane Fonda in a leotard and leg warmers super-charged the aerobics field in the 1980s.

Now, some unlikely candidates have arrived to lay claim to the throne that the Hollywood icon abandoned almost 25 years ago. Two California sisters, Sheila and Sarina Jain, whose family hails from Rajasthan, India, are billing themselves as the "Indian Jane Fondas."

Sheila, 28, of San Francisco, teaches around the California Bay Area. Sarina, 29, moved to New York City to strike it big. Together, they are changing the international aerobics landscape with a pioneering and patented Indian aerobic dance routine, called Masala Bhangra Workout. Their fourth exercise DVD has just been released, and they recently have signed a contract for international distribution.

Masala means "spicy" in Hindi. Bhangra is a traditional harvest dance from northern India. Together, the popular routine is helping introduce Indian culture through exercise, and enticing those from the subcontinent to put down the greasy samosas and skip to the right, hop, hop, hop. Circle to the left, circle to the right. Knees up. Knees up.

The Jain sisters’ exercise routine is not for the faint of heart. And it’s certainly not for the uncoordinated. In some ways, it’s all about the head. It must constantly bob, side to side, to the beat of an Indian dhol drum.

"Just go to an Indian party and shake your head. You’ll look sooooo cool," Jain shouted recently to a crowd of about 150 sweaty aerobicizers at her popular University of California-Berkeley session.

In many ways, the workout is similar to any other kind of aerobics class. The purpose is to boost cardiovascular fitness. What makes the Jain routine unique is the Indian tunes, and the arm and head movements, which Jain does effortlessly.

Aerobicizers must pretend they are in the midst of the happy harvest season, holding their arms up high, twisting their wrists as if picking wheat or plowing a field. Many look more like gawky chickens than the graceful dancers performing the age-old northern Indian art.

Interestingly, the Jains’ clientele is not predominantly of Indian background. They say first-generation immigrants typically haven’t had the time or inclination to work out at gyms. Younger Indians who learned traditional bhangra dancing as kids aren’t interested in incorporating the wheat harvest in their aerobic workout.

"Our target isn’t necessarily Indians," Sheila Jain said. "Our perfect venue is where there are tons of gyms, and a progressive population."

Jain’s class at the gym at UC-Berkeley is just that.

Michelle Haghpanah, 25, said she is tired of doing the same old aerobics routine. "I like the energy," she said. "This is a new way to do old things."

There are a handful of other Indian aerobics instructors nationwide, and there’s Honey Kalaria, a popular dance instructor in England who leads Bollywood-style workouts mixed with bhangra and Hindi dancing.

But the Jain sisters are among the first, launching Masala Bhangra five years ago. The workout is the culmination of their teenage years, when they taught mainstream aerobics at a recreation center in Orange County, Calif., and danced in bhangra competitions organized by a family friend.

Then in 1994, their father, at age 47, died of heart disease – a common ailment in the Indo-American community, whose diet is rich in cheese, cream and butter. If he had exercised more, would he have lived a longer life? the sisters wondered. They started their business shortly after.

For now, the Jain sisters are happy to be promoting their workout on two progressive-minded coasts. They’d like to expand to new locations, reaching out to all age groups. They joke that they may enlist their mother, who lives in Irvine, Calif., to teach Masala Bhangra to her friends.

"More and more, the older Indian generation of Indians is recognizing the benefits of exercise," Sheila Jain said. "And the bhangra music is something they would likely stick to and enjoy."

For more information on Masala Bhangra Workout, click on www.masaladance.com.