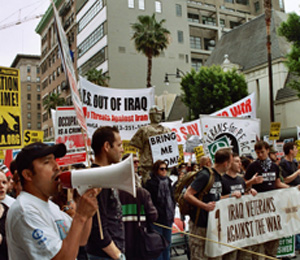 Iraqi and Palestinian flags rippled gently as they swayed above the mass of protestors. Picket signs scrawled with rants, hopes and fears were hefted up and down to the electric sounds of the rhythmic chants. The organizers, perched on a makeshift stage on a utility vehicle plastered with propaganda, alternated between coordinating these chants, delivering instructions and introducing fierce, unyielding speakers from the disparate groups that assembled that day.

The protest, planned and hosted by the Answer LA coalition, has been an annual staple since the invasion of Iraq in 2003. In recent years these protests have mobilized thousands of people and groups – each with their own agenda – to raise awareness against the injustices of the Iraq and Palestinian occupations. The perceived corruptions, scandals and disgraces of the Bush administration only swelled the ranks of these activists and allowed them to unite and rally against an easy target.

But this year was supposed to be different. The freshly minted Obama administration was initially thought to represent the anti-war segment, initiate strong action to immediately bring home the troops and boldly defy the neo-conservative agenda that had governed Washington for the past eight years. “Hope and Change were just campaign slogans,” the loudspeaker blared as protestors muttered agreement.

Then, the red-faced speaker yelped his best line: “Hope is in the struggle, and Change will come in the streets.”

The crowd roared and jittered their picket signs. The words seemed ripped from a Pro-Chavez rally in Venezuela – but the comment felt real, the emotion genuine and the pervasive attitude reveled in respectful civil disobedience.

The makeshift stage/utility vehicle revved up with a jolt and led the way down Hollywood Boulevard as thousands followed. The long march began. The loud, repetitious chanting remerged.

We marched to protest a war that had become a financial sinkhole and international fiasco. We marched down towards the scrolling headlines on the CNN building. We marched against the spin of White House press corps, cable news shows and all the rest.

We marched down the cordoned off streets past curious onlookers taking pictures from the upper levels of the Kodak Theatre and the costumed Disney characters and Marvel superheroes that lined the boulevard. The bicycle policemen were cautiously trailing. We marched to feel our feet on the dotted yellow lines of the rubber scorched, congested boulevard.

We marched for equal pay for women in the work place. We marched with gay activists to protest the passage of Prop 8. We marched because we were tired. We marched to save the environment from global warming. We marched to legalize marijuana. We marched so that out of work SAG actors could get more jobs.

We marched so that independent documentary filmmakers eagerly striding beside us would get a good shot. We marched to show solidarity for socialism. We marched so someone, everyone, would notice.

We marched down the boulevard for a single cause, for many or for none. We marched out of principle, purpose, boredom or curiosity – hoisting our signs and slogans with conviction. We marched for everything and nothing with hope that it would all mean something.