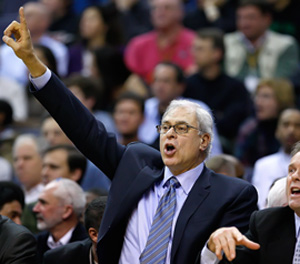 The 58-15 LAKERS will host the 18-56 CLIPPERS Sunday for the L.A. squads’ final match-up against each other this season. The Lakers are likely to win but considering their recent habit of giving up big leads, anything can happen.

The Clippers’ Marcus Camby sprained his left ankle during Friday’s 98-111 loss to the 48-25 Spurs and may not be back before the season ends. Baron Davis sat out Saturday’s game against the 48-26 Rockets (The Clips lost 93-110.) because of a strained calf and stomach ulcers, but plans to return tonight against the 45-27 Hornets. The team heads to Denver (48-26) Saturday before returning to Staples to face the Lakers.

Although Kobe Bryant sprained his right ankle, the Lakers beat the 30-43 Nets 103-95 and clinched the top playoff seed in the West Friday. The game also marked Phil Jackson’s record-setting 728th game as the team’s coach.

The Lakers wrap up their longest road trip of the season tonight in Milwaukee (31-43). They host the Rockets Friday, the Clippers Sunday then head to Sacramento (16-56) Tuesday.