WHO DOES SHE THINK SHE IS?: Art imitates more than just life. 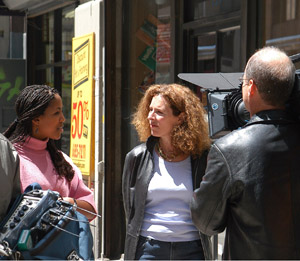 Let’s be honest, men have an undeniable presence in the work force. Especially in the history of art, it’s been all about men. Vincent van Gogh introduced the world to color just as Ernest Hemingway revolutionized literature’s oppressed tragic hero, and so on and so on.

In fact, though 48 percent of professionally trained artists and art historians are women, only two to seven percent of artwork displayed by major institutions is created by women. The numbers really don’t lie.

Filmmaker Pamela Tanner Boll is trying to change that. Her new documentary, Who Does She Think She Is?, is a testament to the power of female artists in modern America.

“The best of art gives us a sense of what the culture is about,” the director explains. “If we don’t have women artists who are giving us their point of view of what matters, what’s beautiful, we are only getting one half of the story.”

The film chronicles the lives of five female artists living in small towns across America. The women hail from Hawaii’s Big Island to Ohio suburbs, from the deserts in New Mexico to New York City. These women are: a Mormon housewife, a ’60s “free love” revolutionary, a working woman who dreams of her native Jamaica, a theater actress and singer whose marriage slowly deteriorates and a single mother whose passion (and source of income) are her artwork.

Their vision is unhindered by society’s neglect. Rather, the requirements that come with being a woman harbor and breed their creativity.

The focus of the documentary is not on the art produced, though many of the pieces are truly spectacular. Instead, Boll chooses to emphasize the roles of women as mothers and artists who contribute the most to society. The filmmaker taps the universality of their stories and their relation to the human culture.

“Artists are oftentimes the visionaries. They show us what matters in our society. We turn to them when we’re lost. I related to bits of pieces of all of them, to be honest. Each of them has some aspect of my story,” she says.

Writing poetry and painting until she was in college, Boll has taken various career paths before she joined the film world as a producer of documentaries. The first-time director cites one particular moment in her life as the inspiration for her art and her motivation to make this film.

“I just had this burst of creativity that came out of caring for my children and really deeply caring for something beyond my own little life,” says the mother of three boys. “It changed my entire world. The feelings that this baby stirred up in me were amazing. I fell madly in love with him. I wanted to see how other women had managed to combine these two passions. That’s why I made the movie.”

Boll has worked hard to see this film hit the big screen. After losing an editor and sitting for months with the untouched raw footage, another two years passed before she could promote the finished product.

But it’s not the struggles that faze Boll. She writes off the difficulties she faces with sheer persistence and endless enthusiasm.

Who Does She Think She Is? releases in select theaters April 3.