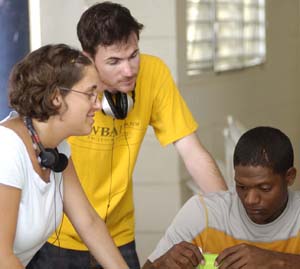 From the Technicolor green grass to the glow of dozens of 1500 watt bulbs, there’s nothing like standing in a stadium, a puddle of discarded peanut shells and Cracker Jack boxes at your feet, indulging in a seventh inning stretch. There is a majesty intrinsic to the baseball diamond, and Sugar, written and directed by Half Nelson’s Anna Boden and Ryan Fleck, is perhaps the first film to ever truly capture its cruel taunting allure.

Everyone knows the clichés of sports movies; the music swells, the underdog wins, the crowd cheers. Who doesn’t get chills when Robert Redford shatters the stadium lights in The Natural? Even Charlie Sheen walking out to “Wild Thing” at the end of Major League can get the hairs on your arm to stand on end.

But Sugar has no such saccharine pretenses. It is, after all, the brainchild of two directors who made a heartwarming film about a crack-addicted schoolteacher.

Sugar follows Miguel “Sugar” Santos, vividly portrayed by newcomer Algenis Pérez Soto in his first acting role, a 19-year-old pitcher from the Dominican Republic struggling to make it to America for a chance to play in the big leagues, and what happens when he lands in Iowa as a top prospect from a minor league team.

The idea sparked in Fleck, a lifelong baseball fan, when he stumbled upon an article about the Dominican baseball academies that every major league baseball team has. Just over 25 percent of all MLB players are from Latin America. Of those, 60 percent are from the Dominican Republic. In the minor leagues, more than 30 percent of the players clawing their way toward stardom are from the small island nation.

“We’ve heard of Manny Ramirez and David Ortiz,” Fleck explains “but what we became curious about are the guys you don’t hear about. What happens to the hundreds of guys who go through this journey every year and don’t make it? What do they do?”

Sugar is the anti-Field of Dreams. It’s not “If you build it, they will come.” Everything’s already been built, and you have to get there.

Like several other films currently in theaters, Sin Nombre and Crossing Over for example, Sugar is as much a story about baseball as it is an examination of how far people are sometimes forced to go to create a better life for themselves and the people they love.

“This is a guy who has achieved the American Dream,” Fleck says adamantly. “He’s sending money home, and that’s a lot more than what he left behind.”

“But it’s challenging too,” Boden counters. “It’s not all a pretty picture. What was exciting about the story was, this is somebody who has to readjust what ‘The Dream’ is or could or should be.”

Both Fleck and Boden say they could not have made the film if it hadn’t been for Pérez, a former infielder who played in the Dominican academies and dreamed of being the next Sammy Sosa. They found Pérez after weeks and weeks of open calls in the Dominican Republic.

“We interviewed about 500 people” Fleck sighs, exhausted by the mere memory. “Algenis was number 452.”

“They asked me if I wanted to be an actor, and I said ‘Yes,’ not because I wanted to, but because I thought that was what they wanted to hear,” Pérez recalls. “I always had my own dream of coming [to America] to become a professional baseball player and that didn’t happen … But I’m here now,” he grins.