SKILLS LIKE THIS: Spencer Berger has the skills to pay the bills 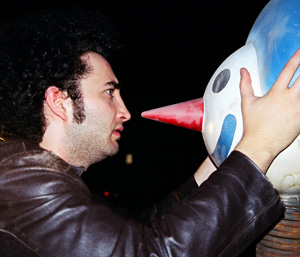 His name may not be on everyone’s lips (just yet) but if screenwriter Spencer Berger keeps up the good work, it will be. The 29-year-old does double-duty in the stylish and hilarious comedy Skills Like This.

Aside from penning its script, Berger also stars as the sticky-fingered male lead, Max. He isn’t just some blend-into-the-background guy. Max is a nice kid sportin’ one mother of a ’fro.

It all goes down like this: Max and his homies (Berger’s real life bestie, Gabriel Tigerman, and Brian D. Phelan) sit around a diner, musing about what it would be like to rob a bank. Instead of finishing the conversation, Max gets up and does just that. He walks across the street, commits the perfect crime and rejoins his friends like nothing ever happened. This is a Steve McQueen moment if ever there were one.

But it gets better. He manages to rob and rob and rob some more while eluding the authorities by hiding that crazy mane under a ski mask. Max even manages to steal the heart of the beautiful bank teller that he held up on his first heist. To say that the guy has a brass pair is to understate … greatly.

Berger’s eccentric view of the world is perhaps an offshoot of his real life. The Vassar College-educated star went through what most 20-somethings face at the end of college: what to do next. After bunking out with Tigerman (who still lived at home with his parents), Berger decided to take some good advice given to him by an unlikely source.

“Literally, I’m living at Gabe’s dad’s house. Gabe’s dad was like, ‘Spencer, you’ve got to do something, here,’” he recalls. “[Gabe’s father] basically suggested I write a screenplay.”

After a brainstorming session with members of his host family, Berger began to pen his crime caper.

The writer’s real-life brood was also a source of great inspiration to him. His mother is a schoolteacher, and his father and sister are both writers.

“They’re all really funny in their own way,” he admits.

He also had the benefit of coming from a background in humor. Berger and Tigerman were active in Los Angeles’ sketch comedy community. Both actors comprised two-thirds of After School Special – better known to fans as A.S.S.

When asked if his writing and performing sketches played a part in some of Skills’ funnier moments (particularly the hair), Berger offers up a surprising yet insightful answer.

“The reason behind the ’fro as fantastical as it is – we need to believe that this character could walk around the streets of Denver and not get caught,” says Berger.

Skills Like This carries the distinction of being shot far from Hollywood or New York City’s oversaturated streets. The production was filmed on location in Colorado.

Director Monty Miranda was largely responsible for that decision. He has built a successful career as a commercial director for a number of renowned clients without ever leaving his home state.

That unusual change of venue even led to some amusing behind-the-scenes moments.

“Gabe and Brian were having the most amazing time of their lives,” says Berger. “And then I’d look out of the trailer window and there [they] would be, running around with giant water guns.”

Berger’s collaboration with Miranda won’t end with this film. The two are slated to partner again on what Berger will only refer to as a “top-secret” project. However, when it comes to the types of films he hopes he can continue to make, this audacious newcomer is an open book.

“I think all I can do is something that’s the most me I can possibly do.”