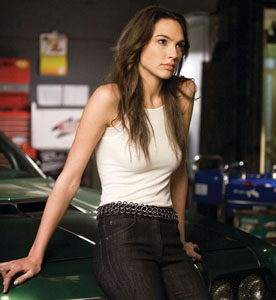 Israel is a country known for its success in everything, from cutting edge high technology, pharmaceuticals, biotech medical research as well as producing beautiful, talented, amazing actresses such as Natalie Portman, Mili Avital and now, Gal Gadot! Gadot, 23, plays the role of Gisele Harabo, a Brazilian beauty, in Fast & Furious, another film in the highly successful, action packed street racing franchise.

Gadot started acting only one and a half years ago, starring in an Israeli TV series/soap opera called “Bubot” (dolls in English). Her first audition for Hollywood was for a James Bond girl. Although coming close, she did not get the part, but the casting director remembered Gadot and found her ideal for her part in Fast & Furious.

Gadot promptly sent out her audition tape, and excitedly recalls, “A week later, I found myself in L.A. doing a screen test with Vin Diesel. Two weeks later, they told me, ‘mazel tov’ and I got the part! And two months later I found myself in a trailer on set, rehearsing my lines with Vin, Paul Walker and the whole cast.”

Being the third leading lady, alongside Michelle Rodriguez and Jordana Brewster, is like a fairy tale Cinderella story, yet Gadot constantly reminds herself of all the intense, hard work that goes along with movie making. Fast & Furious, being such a big production with huge action/stunt scenes and special effects, has been quite an experience for Gal Gadot as her introduction to Hollywood. Yet, she stays humble and has felt so welcome by the director [Justin Lin], cast and crew.

Although she did have a stunt double for the action sequences, which involved jumping on cars in the midst of an explosion, she prepared diligently, studying her lines constantly and researching the backstory on Gisele’s character. In order to add depth and development to her role, she learned a lot about where Gisele came from, her family life and how “at first she hangs out with the bad guys, yet as the movie progresses, the viewers see the very good side of her and how sophisticated and intelligent she truly is!” says Gadot.

Fast & Furious has definitely whet Gadot’s appetite. “I have a very big hunger to continue in this industry.”

Fans will be happy to know that she will soon return to Los Angeles to film an episode of “Entourage.” Eager to come back to the states, Gadot explains, “Los Angeles reminds me of home, Tel Aviv – the weather, the big city life and I love New York too – the people, food, culture. I’m a self-proclaimed citizen of the world!”

A former Miss Israel 2004, Gal Gadot is thrilled to be a part of the winning formula that this major blockbuster holds – fast cars and hot chicks – and brings an exotic charm to the trio. She fit right in and felt an instant connection to the team throughout the filming.

Like one of her idols, Madonna, Gadot also started her career from scratch and hopes to influence and entertain generations of moviegoers throughout the world. She also hopes to combine and juggle her acting career with solid relationships with family and friends.

Theodor Herzl, the founding father of modern Zionism, said, “If you will it, it is no dream.” This philosophy and can-do attitude is what guides Gal Gadot in her daily life and makes her the shining starlet she is.