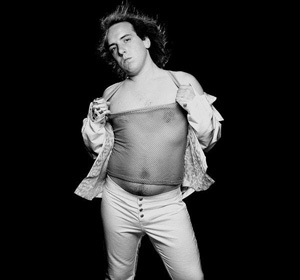 On stage, he dances around looking like a disco-era Jewish Ron Jeremy, but tubby, balding and singing exhibitionist Har Mar Superstar also makes comedy shorts with his friends whose premises wouldn’t be very funny except his friends are Justin Long (Dodgeball, Mac guy), Keir O’Donnell (the weird brother in Wedding Crashers) and Ryan Rickett (director of indie rock music videos).

Back in Los Angeles after playing Austin’s infamous SXSW music festival last week, Har Mar – neé Sean Tillmann – has a Thursday night show at Bootleg Theater that will double as a screening event for his new film posse’s accumulation of shorts, which includes holiday-themed disasters and purposely vague music tutorials.

“An Evening With Har Mar” will screen a yet-to-be-determined amount of viral videos, like those from the “Crappy Holidays” collection where Har Mar plays the holiday’s speechless mascot (a depressed Santa in one, an over-enthusiastic diaper-clad cupid in another), and his professional co-stars eat his heart, beat him up or get him drunk and hack up the body.

Even though you can find most of the shorts already uploaded to the crew’s YouTube account, an appearance at the warehouse-bar space seems like the perfect setting to meet the comedy stars in person and then watch one of them perform songs with titles like “Power Lunch,” “DUI” and “E-Z Pass.”

And with JJAMZ, Dot Hacker and DJ Boom Bip to wrap out the night, it might be hard to choose between Har Mar’s film shorts or his two-sizes too small golden lamé ones. 8:30 p.m. $10.