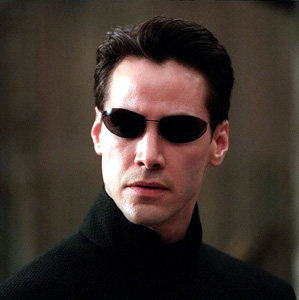 Keanu Reeves as Neo in The Matrix.

For my 100th Screen Shots column and the third entry into my five part series that has nothing to do with upcoming films, I will focus on a franchise that is very dear to my heart. Anybody who knows me knows that my favorite film is The Matrix, written and directed by the Wachowskis and starring Keanu Reeves, Laurence Fishburne and Hugo Weaving.

That film combined literally every component I love about movies and synthesized them into this super-film that kicked all kinds of ass on every level. Contrary to my sentiments about sequels, I am a big fan of them, because nothing is more exciting and causes more hysteria than the continuation or the next installment of a really awesome popular franchise.

When I learned that the Wachowskis were going to make two sequels to The Matrix, I was overjoyed. Film touches me in ways nothing else in the world can, and that film had a profound effect on me. Everything from the ideas, philosophy, stunts, design and performances hit me on a very visceral level, and the idea of more put me in such a state of excitement to see the sequels that I subconsciously decided to love them before I had seen them.

Fast forward to the point where I’ve seen both sequels: The Matrix Reloaded and The Matrix Revolutions. Even though the films made a substantial amount of money, they were critically panned. At the time I couldn’t understand why people weren’t digging the films because after all, this was The Matrix, right?

It wasn’t until almost half a decade after the films came out that I was able to come to terms with the fact that I had a Matrix bias that I was able to separate myself from the films and finally look at them objectively. And when I did, I recognized a predicament that permeates throughout the entire movie business: Script vs. Special Effects.

When I finally looked at the Matrix sequels with fresh eyes, I realized that the special effects and action sequences were obviously more important to the filmmakers than the scripts. Personally, I felt that the stories they came up with were awesome, but the execution of the stories into scripts lead me to believe that the filmmakers were a lot more eager to start crafting the action than they were the screenplays.

The first film set a huge bar for special effects, and it was understandable that the directors felt they needed to top themselves. It was obvious to me (probably because I’m a screenwriter), but nobody else could really offer up a clear argument about why they didn’t like the Matrix sequels other than the fact that “they just didn’t.”

It also wasn’t until after many repeated viewings of the sequels that I felt I began to understand amazing things about the stories that were completely unclear upon the first several viewings. The fact that some of the best stuff was too cryptic and disguised for most people to understand was another indicator to me that not enough focus was put on developing the scripts. I thought the stories of the sequels were fantastic and flipped the ideas of the first film on their heads in a great way, but the actual scripts were the chink in the armor.

Movie audiences today have seen it all. We’ve seen every creature, robot, explosion, alien or gadget you could throw at us. The only thing that really can be done is making the effects look more real, but at the end of the day, it’s supposed to be fake. Which means we are right back where we started, with story and script.

Too many filmmakers base all their decisions on the mind-blowing impressive special effects that are at their disposal, but special effects will never be able to make a bad script amazing. Just take a moment and imagine if all the special effects artists in the world were gone, and all filmmakers would have to make films that entirely relied on story and character. What a world that would be, huh?