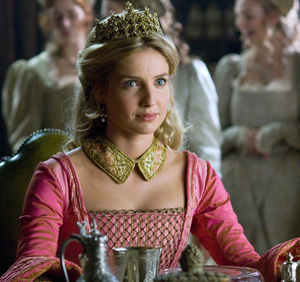 Annabelle Wallis as Jane Seymour in “The Tudors”
(Credit: Courtesy of Showtime)

With the popularity and appeal of films like The Duchess and The Queen, Showtime’s “The Tudors” has quite a fan base. A period piece and historical drama, it showcases authentic costumes, settings and storyline.

“It’s a wonderful production to be a part of, a historical piece set in the 1500s Tudor period in England,” says series star Annabelle Wallis (Henry VIII’s third wife Jane Seymour – the love of his life – and Queen of England), who is only in her mid-20s.

Although she only touched upon the academic subject in her school studies, she explains, “When I knew I was on this project, I had to buckle down and do my research in preparation for the part.”

Lucky for her and the entire cast, writer Michael Hirst is a historian by profession; his expertise lends a realness to the characters’ depth and the show’s historical accuracy. Wallis feels that people of her generation have a fascination with the show, set in a time and world so far removed from their own reality.

“In the MySpace, Facebook generation, we are our own gods and keepers, with no rules or boundaries – who we want to be each day, we create with an updated status,” she explains. “‘The Tudors’ gives us a chance to look at a time and world so fundamentally ruled by religious morals and codes to live by and not break.”

The show, now in its third season, has a huge following in America and England, and is now broadcast in 72 countries.

Marveling at this phenomenal hit, Wallis remarks, “Rather than a historical show being boring or bypassed, Showtime has succeeded in making it entertaining and riveting, vamping it up for people to connect with.”

Season three of “The Tudors” premieres April 5 at 9 p.m. on Showtime.