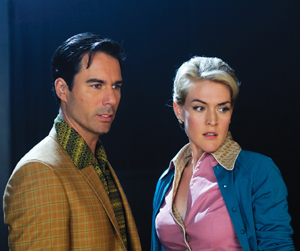 In a time of recession, I’ve learned that pure escapism is worth its weight in gold. This is what Alien Trespass offers.

In this small-budget gem, director R.W. Goodwin, best known for his work on “The X-Files,” sets out to emulate the style of late 1950s sci-fi movies like The Blob. I’m no expert on this genre of movie, but I can say that I was whole-heartedly entertained for the entire duration.

While there were some groans in the audience about the acting being cheesy, I could see that seasoned veterans like Eric McCormack (Will from “Will & Grace”) and Jenni Baird, an Australian newcomer to the American scene whom I hope to see more of, along with an exceptional supporting cast, were masterfully recreating a more dramatic, earnest, by-gone style of acting.

Many say that this type of 1950s cinema, where humans were in constant threat of extinction from alien-life forms, was an artistic manifestation of fear of nuclear threat in the beginnings of the Cold War. Now, in 2009, I think people are more terrified of pink slips, benefits running out and moving back in with their parents.

If you need just two hours to escape from these all-too familiar phrases, “Have you tried craigslist?” and my personal favorite, “We’re always accepting applications,” then turn to this movie for pure fun.