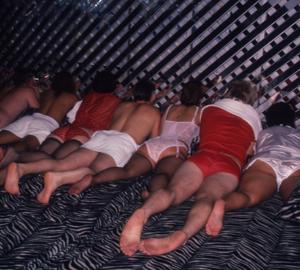 A view of the internationally famous mattress room at Plato’s Retreat in American Swing.
(Credit: Courtesy of Magnolia Pictures)

It was an era of rampant, wild, crazy, revolutionary promiscuity. And New York City was its epicenter.

The age of your parents’ good ol’ fashion date night was radically altered into a new wave alternative to dinner and a movie. Then again, it very well could have been your parents who partook in the radical lifestyle of American swingers.

Husband, father and former wholesale meat purveyor, Larry Levenson created Plato’s Retreat, a NYC club opened in the late 1970s. It was a place that welcomed singles and couples looking to “swing,” meaning they wished to trade partners and indulge is sexual acts heavily condoned by a society led by the morals of talk show host Phil Donahue.

But for just $35, sexually deviant individuals could leave their normal lives at the door while they entered an amusement park of sexual pleasure and moral ambiguity. For Levenson and his many followers, Plato’s Retreat was a sort of utopia and part of the underground scene that included NFL players, “SNL” cast members, famous singers and the like.

Levenson rode the wave of his success to its peak. His world came crashing down in the form of tax evasion, sending him to jail.

Directors Mathew Kaufman and Jon Hart spent countless months compiling never-before-seen archival footage from decades ago. The two traveled across the country, gathering interviews with former patrons, employees and enthusiasts of Plato’s Retreat, as well as Levenson’s own family members.

It is not the graphic nature of the images, but the repetition of the same visuals that become too much to handle. The story lulls at parts then picks up at inopportune moments. The filmmakers spend the majority of the film setting up the atmosphere of the “swinger” scene, but they fail to tell a compelling story.

As a virtually untapped fountain of commercial and cinematic possibility, this film vividly portrays “swinging” in American culture, though with little regard for thematic recognition and definitely without a plot-driven, audience-pleasing narrative.