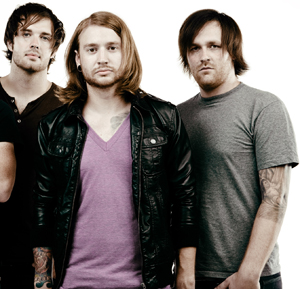 Glorified, criticized, stigmatized, praised, ridiculed and vilified, oftentimes all within the same breath, there’s no doubt that labeling oneself as part of a Christian band will surely have a polarizing effect on listeners. For better or worse, the bigger question posed by these bands is whether Christian music and mainstream music are mutually exclusive to each other.

As far as the members of Indiana metalcore act Haste the Day are concerned, however, the line dividing the two is nothing they can’t break. Which of the aforementioned brandings are going to apply as they proceed to do so will of course depend on whom you ask.

Currently operating as a three-piece after the arguably forcible removal of guitarist Jason Barnes and the more amicable departure of drummer Devin Chaulk, both within the last year, lesser bands might have crumbled under such changes. Though the former did spark some controversy, the band nevertheless saw the release of Dreamer, their fourth studio album, by last year’s end as well.

Whether you agree with their beliefs or decisions, suffice to say 2008 was an eventful year for the band’s remaining members: guitarist Brennan Chaulk, vocalist Stephen Keech and bassist Michael Murphy. Amid any talk and speculation about his band, Keech stands firm that his songwriting inspiration isn’t affected by anyone else’s expectations for his band.

Though he’s grown to be comfortable in this role since he first joined the band in 2006, Keech admits there was some uncertainty between him and his band mates before recording 2007’s Pressure the Hinges.

“We never talked about it when I joined the band, but writing’s one of my favorite things to do. I was a little nervous when it came to writing time with them, and I think they were too. So I wrote a few songs for them, and they weren’t horrible I guess, since they allowed them to be on the record,” he says with a laugh, adding, “Maybe it was lack of songs written altogether, but they ended up on the record somehow.”

With over three years as Haste the Day’s frontman under his belt, Keech has since earned his stripes over the course of two studio albums and countless months spent on the road.

“You learn a lot about yourself on the road,” he says. “You’re put in situations you’d never be in if you were home, and you grow up a lot. Being in a van full of eight people and being totally disconnected from home, you can get real lonely, so you have to learn how to live with yourself. And when you leave home, your friends learn how to live without you, so you learn a lot of independence.”

Having long passed his fledgling days with the band, Keech still finds himself surprised by the level of response he receives from fans.

“A lot more kids than I would expect have gotten Haste the Day tattoos,” he says. “One kid really stuck out, he showed us this tattoo that his sister had drawn that had some Haste the Day lyrics in it. His sister had passed about a month before the show, and that was just so deep, I didn’t even know what to say. I mean, what can you say to that? It’s weird to see our music affects people.”

Much as it might catch him off guard, Keech assures that that kind of interaction is exactly what he hopes to get from fans.

“I’ll ask kids to come talk to us after shows if they have any questions about what we believe. We want to talk to kids on a personal level and get to know a little about them and their lives,” he says. “I want our music to stir something in someone. I’m not really specific about what that is, but I want it to get them thinking about something.”