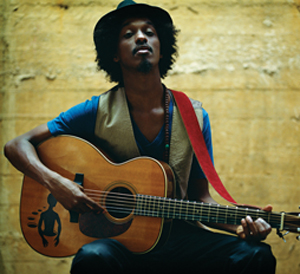 The music industry has run amuck with gimmicky acts and lackluster production, and it’s time for change. Out of Africa comes a refreshing new face for hip-hop: K’Naan Warsame.

K’Naan has seen it all: bombs, bullets, dead children in the street. Growing up in the war-torn country of Somalia made K’Naan tough.

As a result of his upbringing, K’Naan’s music “is really about me, rather than a persona. If I get to a stage in my career when I’m done with my biography, the stories in my life, then maybe I’ll develop something, but for now it’s just me.”

Due to this awareness and grasp of what really matters in life, K’Naan’s latest release, Troubadour, is motivational. K’Naan has created his own lane in music: passionate, rousing and entertaining. His music is a salute to the old school foundation of hip-hop with a new school twist; a nod to the eras of hip-hop where a dance party breakbeat was lined with socially conscious lyrical content and a human life meant more than a gold chain.

“Everybody has a different way they see the world. In songs like ‘[T.I.A] (This Is Africa),’ I’m trying to put things in perspective. I know the ’hood. I’ve lived in the ’hoods in America for half my life, but the other half I lived in a ’hood that’s like the mother of your ’hood. Everybody has their struggles, and that’s all legitimate, but I just see things differently,” he shares.

Thanks to his hard work mentality and lyrical wordplay on Troubadour’s lead single, “ABC’s” (a play of Chubb Rock’s “Treat em’ Right”), K’Naan has garnered buzz in the industry and amongst his peers, recently being featured as MTV’s artist of the week. However, with success comes hardship, and K’Naan is not exempt from the effects being on a major label has on a new artist.

He says, “When you put music out independently there are fewer opinions on your music than there is in major labels. The stakes are so high that a lot of people have a say on what you put out as a single and how your music sounds. I’m not egotistical about many things in my life, but I am about my music. It’s not easy for me to hear opinions.”

Though the industry can be stressful for most, K’Naan has used his past as an example that in adversity one can still rise to the top. His music is reflective of his life: raw and real. Every man has his story. The stage is set for K’Naan to tell his.