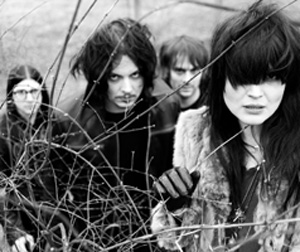 Jack White (the White Stripes, the Raconteurs) has formed a new band called the Dead Weather with Alison Mosshart of the Kills and his pals Jack Lawrence (the Raconteurs) and Dean Fertita (Queens of the Stone Age). The band recently played for the public for the first time at a party celebrating the opening of the Nashville headquarters of White’s label, Third Man Records.

Attendees received limited-edition seven-inch vinyl singles featuring an original song called “Hang You from the Heavens” and a cover of Gary Numan’s “Are Friends Electric?” while the rest of us will have to wait until June for the official release of the first Dead Weather album, Horehound.

Electronic artist and producer Kaskade has been so busy taking other artists to the top of the charts that it’s a wonder he has any time left to work on his own project. The mix-master has recently had hits with Britney Spears’ “Womanizer,” LeAnn Rimes’ “What I Cannot Change” and Empire of the Sun’s “Walking on a Dream,” and now he’s hoping to repeat that success with the release of his latest mix album called The Grand.

PNAU, Zip Zip Through the Night, Deadmau5, Tommy Trash and Nubreed are just a few of the artists who get the magic Kaskade touch on The Grand, which has just dropped through Ultra Records. Of course it’s also a “grand” time whenever Kaskade warms up the dance floor in person; he’ll be appearing at the Heat Ultra Lounge in Anaheim April 2 and then at the Vanguard on the 4th.

Nouveau-folkie Marissa Nadler has a reputation for writing songs that dwell on the dark side of life, even to the point where her MySpace page is accessed at “songsoftheend.” So it shouldn’t come as any surprise that the Boston-based singer has titled her latest effort Little Hells.

But is everything actually gloom-and-doom? Not really, says Nadler.

“The songs take on different personalities at different points in time. If a song is good you should be able to do it in any style and transform it, take a risk and have some fun.”

If you’d like to hear how songs like “Brittle, Crushed & Torn” and “River of Dirt” might have changed since the recent release of Little Hells, make it a point to check out Nadler’s show at the Hotel Café April 7.

The amazing a cappella vocal group SONOS sings songs by Fleet Foxes, Radiohead, Rufus Wainwright, Björk and many others on their brand new self-titled album, and you can marvel at their unaccompanied magnificence when they perform at the Home Restaurant in Silver Lake April 4.