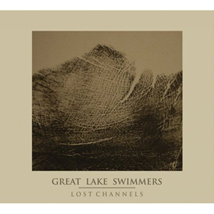 The lonely, isolated places where Tony Dekker and Great Lake Swimmers produce their albums permeate the Toronto-based band’s fourth long player, Lost Channels. The title even refers to Ontario’s Thousand Islands region where most of these 12 tracks were laid down.

Yet, Lost Channels is more energetic than previous releases. Opener “Palmistry” and “She Comes to Me in Dreams” evoke early-’80s jangle rock, “Pulling on a Line” conjures Bright Eyes and upbeat acoustic guitars plow through many songs.

While Dekker’s writing has improved, his similes still occasionally undermine his intentions, although that is a small quibble.