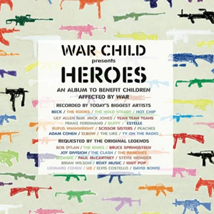 It’ll be easy enough to say that the gimmick outweighs the music: 16 music icons handpick a young artist of today’s music elite to remake one of their classics for a benefit album that provides aid to children affected by war. Yet Heroes reaches far beyond the been-there-done-that compilation as a standalone collection that challenges geniuses old and new.

Estelle’s straightforward rendition of Stevie Wonder’s “Superstition,” along with Franz Ferdinand’s live version of Blondie’s “Call Me,” make sense, but do little to stimulate the originals. Same goes for the Hold Steady’s Craig Finn who channels the Boss way too closely on “Atlantic City.”

Those that dare to leave their unique imprint do so remarkably: Scissor Sisters glamorize Roxy Music’s “Do the Strand,” Peaches switches gender roles in “Search and Destroy” from the Stooges and Adam Cohen breaks language barriers in his Spanish version of Leonard Cohen’s “Take This Waltz (Toma Este Waltz).”

The Clash’s Mick Jones joins Lily Allen in the only track to feature an original member of the artist being covered on her lullaby version of “Straight to Hell,” adding piano balladry and multilayered production to the original’s bare punk.