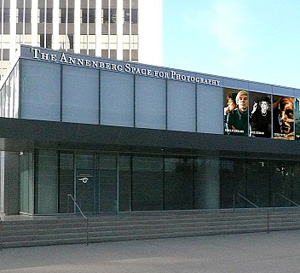 Let’s get this out of the way now. Unlike the vanity plates whose meaning you’re forced to debate with whoever’s in the passenger seat, this one is quite clear: There’s eight Los Angeles-based photographers working in the genres of fine art, architecture, documentary, fashion, photojournalism and celebrity portraits, and three staff photographers from the L.A. Times (who may or not be working for it by the time this is published, who may or not be working at any print newspaper as none will exist … though in which case, I don’t know where this would be published … perhaps in the Campus Circle online edition).

The previous sentence’s postmodern, self-reflexive meanderings are not solely the result of writer anxiety: to photograph the City of Angels (which may as well also take the title City of Light given its success in finally blotting out the one remaining star that was visible (thank you, electronic billboards). Clearly, it’s easy to disparage the City of Discarded Carl’s Jr. Wrappers – which is probably why so many of the artists at the inaugural exhibit of this new exhibition space explore the space between how the rest of the world views Hollywood Boulevard and how us natives, or long-term transplants, know it’s nothing more than souvenir and smoke shops and those odd pseudo-homeless teenagers/punk rockers who beg for change but seem to always be well nourished and dressed in the latest Hot Topic fashions.

Lauren Greenfield, with her punchy ingénue photos, “features the dark side of the idealized world of stardom and celebrity” while Times photographer Carolyn Cole showcases armed conflicts around the world removed from the punchy ingénues inhabiting the Grove.

Yet, an artist like Lawrence Ho lifts his lens and captures a lone surfer, against the Pacific and a boardwalk at sunset, and reminds us in a single panoramic shot why we’re willing to spend $6 to park in Santa Monica for 10 minutes.

The Annenberg Space for Photography is located at Century Plaza, 2000 Avenue of the Stars, #10, Los Angeles. For more information, visit annenbergspaceforphotography.org.