Battle of the Band Names: The Best and Worst Band Names Ever (and All the Brilliant, Colorful, Stupid Ones in Between) 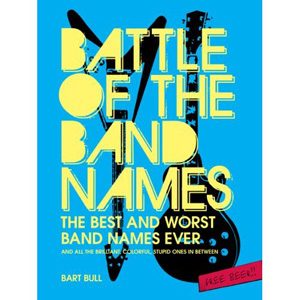 Battle of the Band Names is a concept you discuss in passing with your friends. Appropriately, it was published in the form of a 250-page book by an award-winning music journalist and – you guessed it – written as though it was part of a conversation, addressed to you, dude. Like a drunken conversation about good and bad band names, the actual text here, introductory to each chapter only, is horribly tangential and used as an excuse to drop names of varying examples before arriving at the actual content: the gobs and gobs of band names in list form.

Bart Bull writes to, it appears, the teen crowd, literally addressing whom as “dude” and making statements like, “Best start that career now, li’l junior, and get yourself a personal certified public accountant that your dad can’t stand. And do it all soon, because before you know it, your voice is going to change, your beard is going to sprout, your dad and you are in court for decades, and you’re dyeing your gray-flecked hair as blond as it’s ever going to get again.”

His addresses to the reader are not informative so much as a failed attempt at forming a bond. But you’re not going to read the text, you’re going to skip ahead to the band name lists, which are at very least thorough and range in theme from women’s bands (New Haven Women’s Liberation Rock Band, anyone?) to the admittedly funny Japanese band list, which is introduced with a to-the-point “Let’s happy making music joy!” and thoughtfully includes the all-important names Dumpy Macho Wife and Good Job!!!

Worth a looksy at the bookstore, not worth 16 bucks.

Battle of the Band Names will be available April 1.