Die Trying: One Man’s Quest to Conquer the Seven Summits 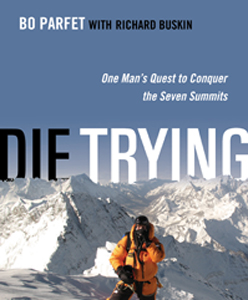 Kilimanjaro, Aconcagua, Denali, Vinson Massif, Elbrus, Carstensz Pyramid, Kosciuskp and Everest. The Seven Summits. The highest mountains of the seven continents. Well, actually there are eight of them, due to a discrepancy between the lists complied by Richard Bass and Reinhold Messner. But that is not important.

What is important is that one day, Bo Parfet, a 26-year-old J.P. Morgan investment banker decided to leave everything he had worked hard for and climb mountains. And not just any mountains.

This inexperienced and untrained climber chose Africa’s Mt. Kilimanjaro, known for its fierce climbing conditions and steep cliffs, for his first try. And he survived avalanches, food poisoning, exhaustion and death defying climbs and falls to share his story with all those who can only dream of having such an adventurous life.

Die Trying takes the reader on a journey of self-discovery across the snow-covered peaks, where the view is even more breathtaking than the climb. Cannibals, local militia, starvation and fear of death fill the pages as Parfet recounts his tangles with these steep rocks. The reader learns how through perseverance and sheer will power he was able to overcome these mountains, much like he did his learning disabilities.