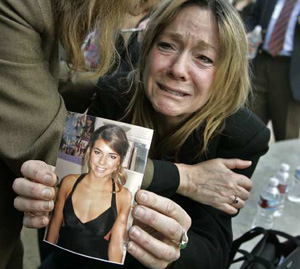 Carmen Bachan holds a photo of her daughter, Adrianna.

Around 3 a.m. Sunday morning, March 29, two USC students – 18-year-old Adrianna Bachan and 19-year-old Marcus Garfinkle – were hit by a black sedan while crossing a crosswalk. Adrianna died at the hospital and Marcus, who was carried 500 feet on the windshield of the car and then removed and thrown to the ground by a passenger of the car, remains in critical condition. Detectives have concluded that the driver of the sedan ran a red light at the intersection of Jefferson Boulevard and Hoover Street. LA City Council is offering $75,000, in addition to $50,000 from USC and $10,000 from the Los Angeles Board of Supervisors, to anyone with information leading to the identity of the driver. Hundreds of students gathered Monday night for a candlelight vigil to Adrianna, and her sorority, Sigma Delta Tau, held a private memorial.

NYC Midnight, an organization that holds film contests dedicated to discovering up-and-coming storytellers, will hold its Sixth Annual Screenwriter’s Challenge this month. Participants are encouraged to write what they don’t know by being required to finish their short screenplay of a surprise genre in as little as 24 hours. The first round of the contest, beginning April 17, asks screenwriters to come up with a maximum 15-page screenplay in eight days; writers will be randomly placed in heats and assigned a specialty genre and subject. One hundred winners will be selected to advance to the second round taking place June 5-6. The final challenge will be to write a screenplay in 24 hours for $13,000 in cash and prizes. The deadline to register at nycmidnight.com is April 15 and costs $45.

USC’s School for Communication and the Keck School of Medicine hosts its first Global Health Awareness Week April 3-10, featuring guest lectures by world-renowned leaders in public health and a diverse series of events to allow students to learn about and share in a passion for global health. Some of the final events include documentary screenings, lunches, a rally for human rights, petition signing and Wheels for Community Service Day, in which volunteers clean, refurbish and pack wheelchairs to be shipped all over the world. The events are free; for a schedule visit globalhealthawareness.org/events.