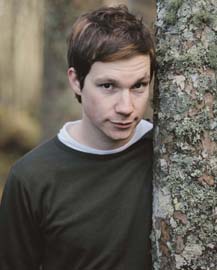 Matt Hales is about to be a real pop star. Maybe.

He’s a dutiful pop star in training as he swigs a beer and fights a cold in a corner of L.A.’s Velvet Margarita. He just finished a gig across the street at the Hotel Cafe and is visibly ailing, but politely engages the mostly industry crowd that floats around him.

He’s enduring this maybe part again, because he already knows what it’s like to be done.

His first album, Strange and Beautiful, under his nom de plume, Aqualung, arrived on these shores two weeks ago to critical acclaim after he built a following in Britain. But in 2002, he was a 30-year-old former prodigy whose band, The 45s, had broken up, its moment in the spotlight passed, its record contract evaporated and the future very bleak.

"It was pretty awful," he says. "You get accustomed to living on a knife edge when you’re a musician. I really had to consider getting a real job. There are worse things, but my dream has always been to do this. So I did what any sane person without a job does, and called anybody that I had ever worked with to let them know I was available."

And then Hales says he took "this needle-in-a-haystack kind of thing."

A friend asked him if he had a song ready to use for a Volkswagen commercial. "I must have been number 102 on a list of 103 of people they called. I had one song, and I hadn’t finished it."

He recorded the song "Strange and Beautiful" in his living room that night. It created such a storm of interest from Britons who tried to find it after hearing it on the commercial that it landed him a new contract.

The piano-driven, bittersweet pop confectionery of Hales’ self-titled debut and its 2003 follow-up, Still Life spun off hits in Britain and eventually had U.S. filmmakers and TV producers swooning, too. Films like Whicker Park and TV’s "Smallville," "Nip/Tuck" and "The O.C." used his songs.

Hales has followed an unlikely path to success, one that has never been without music.

His parents owned a record and bookshop in Southampton, and Hales grew up absorbing everything he heard. Though a classically trained pianist who composed and performed his first symphony as a teen, The Beach Boys’ Pet Sounds, The Beatles’ Rubber Soul and Stevie Wonder’s Songs in the Key of Life had a huge effect on him, he says.

"I suppose it all mixes together inside. I can’t untie it and tell what bits are what. People think that because of my training, I look at music intellectually. Music is something that comes from inside. All this stuff I know comes in handy, but it has nothing to do with the writing. There’s a song that has a debt to Chopin but it had the sound that captured the feeling I had in myself. It’s just a question of the language you use. You can’t isolate yourself from your influences."

And he says his personal reinvention was a matter of simply following his gut.

"There was no design. I just knew that if something felt right, I wasn’t gonna think twice. I’m just gonna trust it."

Despite the new batch of personal songs, Hales wanted a name, if not a real band, to shield himself, but was unaware that people would confuse him somehow with Jethro Tull, which recorded the 1971 album Aqualung. He admits to surprise and mild annoyance and insists there will be no one-legged flute solos.

"There’s something in being called Matt Hales that might have limited it," he says. "And there’s something nice in anonymity. In the end, you have your face and your name, and I wanted to keep them. The label suggested I change it, but I don’t want to confuse everyone by changing my name to the Matt Hales Experience."

He’s quite pleased with the word-of-mouth manner in which his music has caught on, and despite everything he’s been though, he’s still reluctant to be marketed too much by Columbia Records.

"When you cross a certain point in the mainstream, people will think, ‘Oh, that’s what everybody’s buying so I’ll buy it, too,’ but people bought it because they really wanted it and that’s nice. But if they happen to number several million that would be OK."