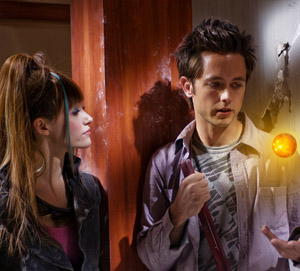 Based on the insanely popular manga series, Dragonball arrives in theaters with a mountain of expectations riding on the cast and their director, James Wong. Dragonball has generated over $4 billion (yes, billion, with a B, as in “Big Bucks”) in revenue, sparked 25 incredibly popular video games and a series that reached the 500-episode mark, all since its debut in 1984.

The film stars Justin Chatwin, best known for playing Tom Cruise’s son in War of the Worlds, as Goku, a boy who discovers on his 18th birthday that he’s actually a powerful warrior entrusted to protect the world from dark, evil forces. He teams up with Bulma, played by Emmy Rossum, on a quest to find Master Roshi, the masterful Chow Yun-Fat, and secure the universe’s seven Dragonballs, which, when combined, grant the holder one perfect wish.

Wong says from the moment he began reading the mangas of Dragonball, he was blown away.

“I thought they were incredible,” he gushes.

But it was the reaction he got from his children that solidified his interest in the project.

“I knew I was on the right track when my kids started stealing the mangas from me and reading them instead of going to sleep.”

The first step to creating a cohesive story for Wong was casting the role of Master Roshi, a character he felt was the story’s center, around which all the other players orbited. He immediately began to pursue Chow Yun-Fat, who brought a charisma and exuberance to the role no one expected. In fact, his delivery was so over the top, he scared his young co-star.

“I remember the first day, when I saw him as Master Roshi,” Chatwin recalls. “I was like, ‘Oh my God, he’s overacting. This is crazy. What is he doing?’ As he kept doing it day after day, I realized there was something I didn’t see in the manga, which is the broad comedy, almost like Kabuki theater, that manga has to have. And Chow understood. I think it rubbed off on us because we started getting goofier and goofier, almost Three Stooges-y, because of what Chow brought to the film. He was a great influence on us.”

For Rossum, the chance to be in an action film, especially alongside a martial arts master, was a dream come true.

“I grew up loving Jean-Claude Van Damme movies. I find that a little bit embarrassing to say,” she admits, blushing.

“Me too,” Chatwin blurts, grinning.

“I always wanted to do a film like that,” Rossum continues. “I wanted to play a tougher, more independent woman, and this was the perfect opportunity.”

But acting out their childhood JCVD fantasies took much more of a toll than they expected.

“It’s like how women describe childbirth,” Rossum explains of their training. “It’s really awful when you’re in it, but two years later you’re like, ‘It was amazing,’” she laughs. “But we did it as a team. It was like group childbirth.”

More demanding than their training, however, are the expectations heaped on the film by Dragonball’s devoted legion of fans. It’s a responsibility the entire cast and crew felt acutely throughout filming, much like labor pains.

“Dragonball is such a rich story,” Wong says reverently. “How do you make a movie out of this huge story and satisfy the fans and, at the same time, make a movie that people who don’t know anything about Dragonball can watch, understand and appreciate? The movie’s not made just for the fans, it’s not made for people who don’t know anything about Dragonball; it’s made for both audiences to appreciate.”