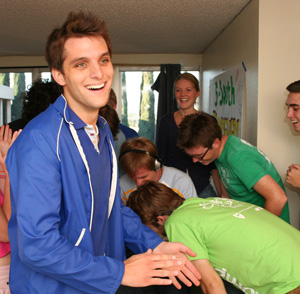 As college students, sticking to the plan is what we’re good at. First we (or mom and dad) make a plan (e.g. Graduate, Become a lawyer, Make lots of money). Then we do just about everything possible to see that it is carried out, exactly how we intended. Come to think of it, we can already see the four adorable little kids, quaint house with the picket fence and white minivan in the driveway all mapped out in the future.

Back in the present, however, leave it to Styx’s ’80s classic rock anthem to tell us all we need to know about our little precautionary habit: Nothing ever goes as planned.

The statement holds true for writer and actor Brian Singleton, who stepped onto the UCLA campus with the concrete idea that he’d be pursuing a steady career in either architecture or engineering.

“Growing up I never saw myself doing something creative for a living. But while in college, I started to explore more of my liberal arts side. I guess you could say I was a sort of a creative late bloomer,” Singleton says.

For Singleton’s creative talents to blossom, he realized it was important to keep an open mind to a wide palette of career choices.

“I just made sure to try a lot of things and meet a lot of people. I had some friends in comedy groups, and it looked fun, so I gave it a shot.”

Singleton’s first bite was a big one: performing comedic skits and parodies in front of a packed audience of 5,000 at UCLA’s Spring Sing. Feeling the pure rush from the night’s performance, he quickly dived into acting and began to work on his comedy improvisation talents, training in the Upright Citizens Brigade Theatre, IO West and UCLA’s Company.

Future plans changed once again when Singleton’s interest shifted to a more behind-the-scenes skill set. He interned with National Geographic documentaries, an advertising agency and the Warner Bros. production office of Fox television sitcom “The War at Home.”

“My experience behind the camera gave me a good vantage point of every moving piece of production, from wardrobe to writing. More than anything, I learned about developing the system.”

The inspiration served well. Now as the do-it-all writing, acting and producing man behind a popular Web show, Singleton and his efforts, though not all intentional, have brought him to a good yet unexpected place in his life. Produced by Attention Span Media, Dorm-Life, a hilarious “mockumentary” that pokes fun at the ridiculous “real-life” situations college students experience while living in the dorms, is the capstone of Singleton’s hard work and genius.

Singleton, who plays the snarky Marshall Adams on the show, admits, “Dorm-Life is really the creative product of a team. It is a good example of a talented group of friends and creative partners acting on camera combined with their willingness and dedication to work behind the camera. We trust each other, so we have the creative capacity to take risks and grow.”

Located at Dorm-Life.com, the interactive Web site features streaming video episodes, broadcast interviews and online community capabilities. Singleton attributes the site’s success to technology and sees the project taking off as an agent of new media. For dorm-dwellers themselves, they will appreciate Dorm-Life as a riveting, genuine depiction “by college students, for college students.”

Singleton says, “When I first started, I thought I had a plan of what I wanted to do but really had no clue. You’ll figure it out. For young creatives, Web shows are a viable way to prove yourself and get yourself out here. That’s the trick.”

New episodes are available every Monday at dorm-life.com.