Josh Schwartz: Changes His Tune from “The O.C.” to “Rockville CA” 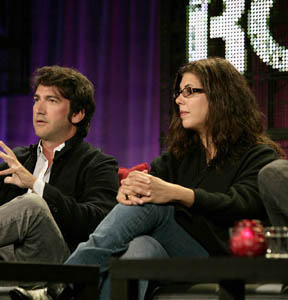 He’s done for television what Woody Allen did for neurotic New Yorkers. Now, producer extraordinaire, Josh Schwartz is focusing his Midas touch on the Internet.

His latest project, “Rockville CA” is set a far cry from the tony Manhattan streets of “Gossip Girl” and golden luxury of the O.C. This time around, Schwartz is hoping to make the trendy east side (most notably Echo Park) famous.

“Rockville CA” revolves around a fictional L.A. venue catering to all things hipster. Within its four walls, a cast of young actors will explore all the good times (drinking, cavorting, canoodling) that come with being young and in love with the music, as well as some of the bad (break-ups, perhaps one or two arbitrary walks of shame, tinnitus, anyone?).

But before the skeptics weigh in and balk at the thought of their favorite dives being given the Hollywood treatment, Schwartz has it covered.

“We shot at the Echoplex,” he says. “The bands perform live so there’s no playback.”

At the end of the day, the groups (who will play their songs during each webisode as a backdrop to the scripted storylines and action of each of the characters) loaded up their gear – just like they would after any performance and went on their way. This allowed the Echoplex to do its thing at night, while holding down a cushy day job.

Some of the talent lined up to perform includes Passion Pit, Lykke Li, the Kaiser Chiefs and the Little Ones. Surprisingly, there were no egos in play from any of the featured musicians; Schwartz contends that everyone they wanted for the show jumped on board.

“All of the bands we reached out to really committed to it,” he says. Adding, “We really wanted [bands] that would be reflective of a show like this.”

Schwartz is even visualizing the future of his current project and thinking of artists that he and Alexandra Patsavas (the music supervisor) would love to place in the spotlight.

“I would love to get Blitzen Trapper on the show,” he confesses.

He also names Bon Iver and the Hold Steady as must-haves for the next round of webisodes.

But music aside (if you can imagine such a thing), Schwartz is truly honored to helm a project that he has absolute passion for.

He’s also thrilled at the process of bringing “Rockville CA” to the World Wide Web where it’s sure to be a fast hit, spreading like wildfire, among viral videos of barfing, wardrobe malfunctions and self-made celebrities.

“It’s a very unique process to storytelling,” he says of the show’s format. “They are smaller types of stories. There’s a cumulative process to watching them.”

Each show will last for roughly four to five minutes – long enough to capture the attention of fickle viewers. However, the question still remains: Will “Rockville CA” thrive among the tragically hip or fall by the wayside due to cynicism and snobbery? After all, programs like “Sex, Love & Secrets,” which was set in nearby Silver Lake crashed and burned with nary a tearful remembrance.

“Gee, I don’t know,” admits Schwartz. “The audience for the show will know who they are.”

And just in case Schwartz hasn’t managed to make a strong enough case for this, his new baby, he breaks it down and clarifies why viewers should tune in – you know, for anyone still on the fence:

Two new additional original episodes of “Rockville CA” will be posted Tuesdays on TheWB.com and myspace.com/rockvilleca through May 12.