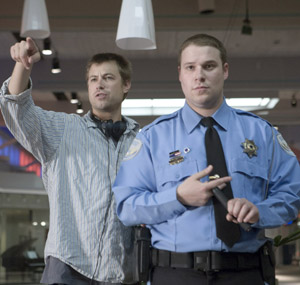 Director Jody Hill and Seth Rogen on the set of Observe and Report
(Credit: Peter Sorel)

Seth Rogen is perhaps the least likely leading man to come down the pike since Dustin Hoffman. Much like Hoffman in Midnight Cowboy, just three years after his star began to seriously rise, Rogen chose to take on a leading role which casts him in an entirely unlikable, but surprisingly captivating, light with his new film, Observe and Report.

Rogen’s Ratzo Rizzo is Ronnie Barnhardt, the bipolar head of security at the Forest Ridge Mall who dreams of one day wielding the power, and firearm, of a bona fide police officer. When his mall is defiled by a flagrant flasher, Ronnie spies his opportunity to achieve the greatness he’s always craved.

Directed by Jody Hill, whose debut film, The Foot Fist Way, won a small but devoted cult following and sparked major industry interest, the film vacillates between broad comedy – thanks to Michael Peña’s Jheri-curled, lisping performance as a fellow security guard and Anna Faris as the mall’s makeup counter vamp – to psychologically profile a man out for vigilante justice.

Some are calling it “Travis Bickle: Mall Cop,” but the film’s director and stars say it was the chance to make what Faris calls “an unapologetic comedy.”

“It seems like a lot of movies are just really safe these days,” Hill explains. “I set out to make a dangerous character piece like some of the ’70s films. [Sam] Peckinpah and Scorsese used to make these pieces that flowed, and you weren’t sure where they were going to go. They didn’t have to answer to the studio and likeability factors, and these made up things Hollywood falls for.”

Following test screenings of the film, Internet rumors ran rampant that the studio would never allow the film to be seen in its current form, which is vulgar and aggressively in-your-face … exactly how the film arrives in theaters.

“[Those bloggers] weren’t privy to the conversations we had before making the movie where we said, ‘We’re making a crazy fucking movie, don’t be surprised when it turns out fucking crazy,’” Rogen laughs.

Rogen also says he’s shocked that the film is being seen as anything other than a comedy since the cast and crew had such an uproarious experience on set.

“As we were filming it, it did not feel like a dark serious role,” Rogen says. “The second they yelled cut, we were laughing, no matter how ‘dark’ it may seem on film.”

The secret weapon Rogen and Hill relied on was a personal connection with the material; as Rogen says, he only makes movies he’d want to see and “I haven’t seen Changeling,” and an underlying relatability. Sure, Ronnie is a belligerent, antagonistic bipolar rent-a-cop, but kernels of his personality are still recognizable to any audience member.

“I think you just need one small thing for people to relate to,” Rogen says. “For this one, he views himself one way, the world views him another, and he has a hard time dealing with that. I think that’s relatable.”

Faris was thrilled to be involved in a project that went so against what most audiences have come to expect from a studio film.

“Very rarely do you come across a character who’s so offensive and awful,” Faris grins. “It’s like taking a bite of a juicy apple … but naughty,” she giggles.

“As a woman, it’s great to not have to win over an audience. Jody wanted me, and all of us, to be as awful as we could. There’s a lot of freedom in that.”

And what happens if the audience doesn’t respond favorably to Hill’s world of caustic losers?

“Nobody saw my first film,” Hill chuckles “so how much worst can it get?”

Interviews
Ai Weiwei on activism in the US, his art response to COVID-19 and a secret Wuhan film
495 views

Interviews
James Bond producer: 007 ‘can be of any color’ but never a woman
1,795 views

Interviews
For Martin Scorsese, making ‘The Irishman’ was about ‘learning to die’
1,416 views
bid=||