Tell No One, Donkey Punch, The Day The Earth Stood Still, more. 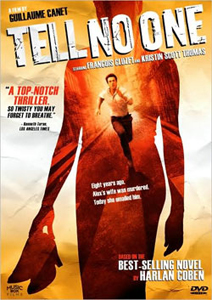 Tell No One, a French adaptation of American thriller writer Harlan Coben’s novel, is one of the best films of last year.

Eight years ago Alexandre Beck’s wife was murdered. He was the prime suspect. When two bodies are found near the sight of his wife’s death, Beck is once again thrown under suspicion. That’s when he receives an e-mail from his wife.

It’s a refreshingly adult thriller with real attention to character.

By taking stylistic and technical elements from the silent era and German expressionism, Canadian auteur Guy Maddin has crafted a unique, off-putting style all his own. 1992’s Careful, available in a newly remastered edition, is a bizarre black comedy set in a fictional village beneath a mountain where all sound is restrained for fear of devastating avalanches. Butlers, incest and suicide are just a few of the many oddly intersecting elements.

Treasures IV: American Avant-Garde Film, 1947-1986 – The title of this recurring series of box sets says it all – with 27 films from animation to documentary by such outsider luminaries as Stan Brakhage, Andy Warhol and Bruce Baillie.

It’s not about chainsaw wielding maniacs or sociopath sadists, but regular, callow young adults on vacation looking for a consequence-free good time who get caught in a terrible situation and act out of fear and self-preservation. It’s how they rationalize their decisions and how quickly that devolves into violence that is unsettlingly realistic.

When the gore comes it is either accidental, taking the characters themselves by surprise, or is emotionally or instinctively motivated. The result is horrifying and entertaining.

Solty-Rei is set in a future after an apocalyptic event where maimed survivors replace body parts with robotic prosthetics. A lone bounty hunter travels the dangerous wasteland with Solty, a girl who falls from the sky.

In Shigurui: Death Frenzy, two master samurai are locked in epic, deadly battle to inherit their master’s sword and the love of his daughter.

Trinity Blood is set in a violence-ravaged future where vampires and humans wage war against each other. One priest travels the land trying to ensure the survival of others.

Also available: D. Gray-Man: Season One, Part One, about a young exorcist in 19th century Europe.

Two classic musicals come to high-def: South Pacific, the wartime Rodgers and Hammerstein musical from 1958, shot in lavish Technicolor. An American in Paris is one of the all-time classics starring the inimitable Gene Kelly, directed by Vincente Minnelli.

The James Bond Collection, Vol. 3 offers a smorgasbord of Bonds, including Roger Moore’s Moonraker, Sean Connery’s Goldfinger and Pierce Brosnan’s The World Is Not Enough.

The Day The Earth Stood Still is one of those beloved classics that is so dated that it’s easy to see how the idea of a remake came about. However, the original is so didactic, so of its time, that to divorce it from that context doesn’t make much sense. But when has that ever stopped Hollywood?