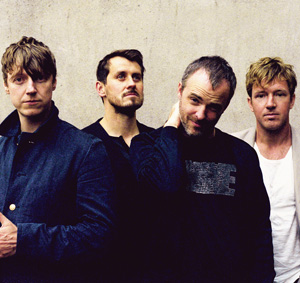 There aren’t many things more beautiful than being on a SoCal Beach listening to the band Travis and their gorgeous melodies and music. That’s exactly what I did as Travis’ drummer, Neil Primrose, graciously took a few moments away from his busy tour to speak to Campus Circle.

It was as big of an honor for me to speak with him as it was for the group to kick off their tour opening for musical genius and icon Peter Gabriel. Primrose says it was a privilege to be on the same bill as Gabriel, and this same type of humbleness is what makes the members and the music of Travis even more beautiful and deserving of all the recognition they have received for over a decade.

“It’s been nice these few dates with Peter Gabriel; he’s iconic to all of us and now we are ready to play full sets for our tour, which begins in Vancouver. We are well rehearsed and excited as it will take its own shape,” he remarks.

When asked where his favorite places to play are when touring away from Scotland, he says that besides Vancouver, Chicago and New York, Los Angeles is definitely on that list as well.

He says, “Chicago is one of my new favorites because when you go, you realize it’s got a lot of character, and the people there are really receptive and more relaxed. New York is New York – it’s always great. L.A. is cool too. There are so many different facets to L.A. Sometimes people only see the entertainment side, but there’s a lot more to L.A., obviously.”

There’s also lot more to Travis than just being another indie band making beautiful music. They have released six studio albums, sold out tours and have been well known for a decade, yet are still not as accessible as Coldplay or U2.

Primrose comments, “I feel the band and our music is lucky to have very unique indie sensibilities that appeal to a lot of people, yet in some ways manage to retain our sanity and keep our heads above water. We’ve managed to have the best of both worlds, and it’s good. When success comes, you do want more of it, you do want to get bigger and bigger and have more people hear your music, but great bands come and go, and sometimes their albums feel rushed after they are expected to put out one right after another. We’ve been fortunate to know when to take our time to put out records that we’ve wanted to put out.”

Like their new album, Ode to J. Smith, a slightly more rocking record with hints of ’70s radio and psychedelica that’s still classic Travis as well; an album with great singles, yet even more amazing when listened to from beginning to end. A breath of fresh air that reminds how bands and music are supposed to sound: real, without a lot of over dubs and a million sound effects and ear pollution. This is like listening to your favorite album on vinyl or CD through and through when you were a child forgetting about your worries and the world outside.

That was one of the goals that Travis set out to accomplish. They recorded Ode to J. Smith live in the studio, which is a rare thing to do these days.

“We took some time off between records because we didn’t want to make music for the sake of it. We chose to spend the time focusing on trying to make the album we wanted to make,” says Primrose.

And that’s another rare thing to hear from a musical artist these days, with so many in a rush to put out hits.

“This is a very interesting time in music, the business landscape, digital technology is all changing. I still go to second hand shops, and I look for classic vinyl to buy. There’s nothing like it. I love vinyl, I love CDs, I like to be able to hold, touch and feel my music,” he says.

After listening to the words spoken as well as Travis’ album, I’m feeling what he’s saying and playing. It’s a beautiful feeling.