SPICE UP YOUR APRIL: With Aterciopelados and More Latin Sounds 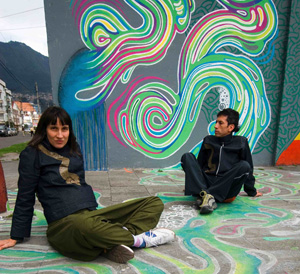 The river of Bogotá will flood the Conga Room April 15. Our dynamic city will host the Colombian band and Latin Grammy-winning Aterciopelados and Alex Cuba.

Since 1995, Aterciopelados have been on a major level with songs that will live forever amongst their fans. Promoting their latest album, Rio, the duo has been described as organic, socially conscious rock. Simply put, their music feels good.

Alex Cuba, an honest singer, writer and musician, will take you places through his music, performed with a natural delivery that smoothes out a rough day. His newest, Agua Del Pozo, is one of those rare albums that I never skip a song on.

Cuba has been performing since his childhood in Cuba and is beginning to make his presence felt in the United States after tearing up a strong Canadian circuit for years (He has won two Juno awards for World Music.). This show is a guaranteed classic for those who truly enjoy real artists and the magic of great live performances.

On Saturday, April 18, on the smaller side of things, Bordello’s in Downtown will host a couple of Los Angeles’ own bands who have been steadily making respectable names for themselves. Los Hollywood splash a bit of Spanglish in their song “No Te Aguites” and are causing heads to turn and voices to burn. Mezklah go from a two-piece to a four-piece after adding musicians from two other pounding L.A. bands from the past (Afixcion and Stoic Frame).

On Sunday. April 19, the Knitting Factory will try to hold a sold-out crowd of ska and punk fans screaming, dancing and rocking every stage in the place. The promoters have made it a tradition to sell out that venue, and on this occasion, they will present the heavily cult followed Mexican ska band, Sectacore, the return of Matamoska and over 10 other bands from all over L.A and San Bernardino counties.

Let’s not underestimate the ghetto youth, who strive and give out the best that’s within their capabilities. The underdogs not only bark, but when they bite, the teeth marks are there for months.

This is only April, and Los Angeles is promising a spring and summer of growth in the local scene. Let’s stay close to these emerging names, sounds and Latin invasions.