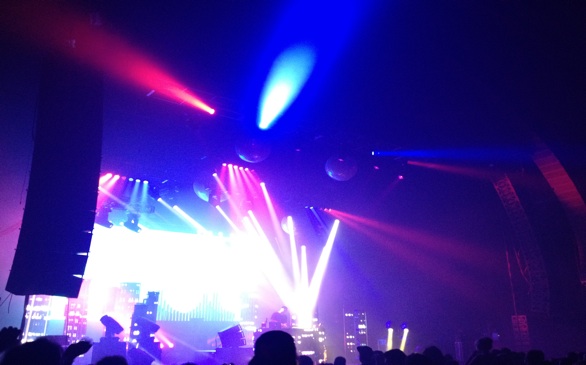 The Breeders’ Fate to Fatal

The Breeders spent all of 2008 on tour, but early this year they had enough time to hit the studio and record four songs for an EP called Fate to Fatal. Singer Kim Deal says the songs on the EP include a live cover of Bob Marley’s “Chances Are” and “The Last Time,” a tune featuring guest vocalist Mark Lanegan (Screaming Trees, Queens of the Stone Age.)

Artwork for the release was created by Chris Glass, the artist who designed the American Recovery and Reinvestment Act logo for the Obama administration. Kim and her twin sister Kelley will be hand-screening the artwork onto the sleeves of the EP that’ll be released on 12-inch vinyl only and limited to 1,000 copies.

And to make sure the new music really gets “rolling,” the Breeders have shot a video for the title cut featuring the Arch Rival Roller Girls roller derby team from St. Louis. Fate to Fatal drops April 21.

Record Store Day, the annual celebration of the independent music store, is Saturday, April 18. The day will see a ton of special releases, most of which you’ll only be able to get if you go into a participating retailer.

Among the goodies are seven-inch vinyl singles from Bob Dylan, Bruce Springsteen, Leonard Cohen, Slayer (red vinyl), the Decemberists and splits from Tom Waits/Lucinda Williams and Sonic Youth/Beck/Jay Reatard. Other vinyl packages will come from the Jesus Lizard (nine seven-inch singles), Radiohead, Guided By Voices and My Morning Jacket, who’ll issue a live recording called Celebracion De La Ciudad Natal as a CD and as a double 10-inch vinyl set.

Some stores will have free copies of a sampler from Universal/Motown/Republic to hand out; it features new urban music from artists like Asher Roth, Madcon and David Rush. Death Row Records is being re-launched to coincide with Record Store Day, and they too will have a sampler up for grabs featuring unreleased tracks from Petey Pablo, Danny Boy and Crooked I. And not to be outdone, Warner Brothers is popping with an urban music sampler featuring Maino, Sophia Fresh, Shawty Lo, Bayje and several others.

Also releasing special Record Day packages will be Wilco, the Smiths, Jane’s Addiction, the Stooges, Modest Mouse, Slipknot and many others. And if your favorite record store happens to be VIP Records you can catch hip-hop artist Nipsey Hussle at the Slauson Avenue location from 4 p.m.-6 p.m. Find a list of other participating stores at recordstoreday.com/venues.

My Chemical Romance: Wear the Vest

Last year My Chemical Romance released a live CD/DVD package featuring a concert filmed at the Palacio de los Deportes sports arena in Mexico City – the October 7 show on the band’s 2007 The Black Parade World Tour. Now live footage of the nine-song encore from that show is being released in a limited-edition collectible package featuring a bullet-shaped USB drive attached to a brand-new custom-designed Venganza fashion vest like the ones the band wore on the tour to support the Three Cheers for Sweet Revenge album.

The vest features the band’s “Circled Guns” logo on the front and the word “Revenge” on the back, plus two downward-facing gun logos on each side. The USB drive, which hangs from a D-ring off the top right chest strap, features nine never-before-seen videos and exclusive photos of the band.

The special package is limited to 5,000 pieces and is available now. For more information, visit mychemicalromance.com.