Looking For Their First Win 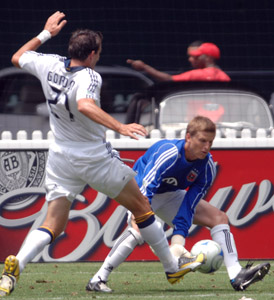 After two home games at the Home Depot Center, the Los Angeles Galaxy only managed to collect one point.

The Galaxy suffered their first defeat of the 2009 campaign as forward Conor Casey’s hat trick guided the Colorado Rapids to a 3-2 road triumph. The loss comes after the Galaxians opened the season with a tie against D.C. United.

Casey’s first goal came 16 seconds in, and it was recorded as the second fastest score in MLS history. He later added scores in the 50th and 84th minutes.

After experiencing a 1-0 deficit, Los Angeles battled back as defender Omar Gonzalez knotted the affair at one piece in the 37th minute. The hosts then took a 2-1 edge after forward Alan Gordon scored. Forward Landon Donovan received both assists.

The Galaxy finish their three-game homestand as they entertain Chivas USA Saturday at 7:30 p.m. They will then embark on a two-match road trip.