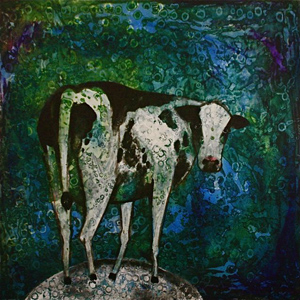 Cow on the Moon by Stephanie Bast

Clara Bow and Greta Garbo are making an appearance at the El Portal Theatre in North Hollywood. Well, not really.

Of course they’re not back from the dead. They’re featured in an exhibit at the Judith Kaufman Gallery, inside of the El Portal Theatre, in two paintings by Stephanie Bast.

Bast’s exhibit features a little bit of something for everyone. There are paintings featuring a butterfly, a cow and a frog, modern museum-style paintings and a mythical painting centered around a “yes” tree.

Bast is a modern-day Renaissance woman. She is a successful singer, professional actress who has performed in six Broadway musicals and an artist. Her career as an artist began with her exceptional first painting at age 6, which was chosen by the First National Bank to be displayed in their front window.

Since Bast’s first painting won a contest at age 7, she has continued to work on her artistic ability. She is an interesting study in multi-disciplinary artistic fields – since she has been able to nurture her acting, singing and artistic sensibilities into three co-existing creative careers. Although, in this exhibit, the focus is entirely on Bast, the painter – her freedom of self-expression and her ability to depict people (like Clara Bow and Greta Garbo) in an accurate and haunting way.

It will be fascinating to see how Bast grows as an artist. She obviously is going to take her art to new levels, and it will be exciting to see what she does next, especially after one sees the eclectic style she showcases in this current exhibit.