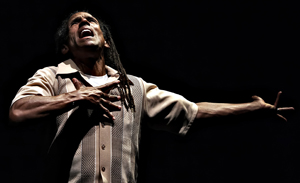 The latest work by choreographer/performer David Roussève, “Saudade,” is a hodgepodge of stories, dance styles and technologies. It begins and ends in the simplest fashion: Roussève standing alone on stage addressing the audience. From this starting point develops a wildly diverse and complex exploration of ideas revolving around the meaning of life.

The title “Saudade” is taken from Portuguese, meaning a kind of bittersweet nostalgia. It is the mood associated with Fado music, a Portuguese version of the blues, which provides the soundtrack for Roussève’s work.

Roussève does far more narration in his piece than actual dancing. He leaves that up to his talented group of multi-cultural dancers, including specialists in West African, Indonesian, Bhangra and of course, modern.

Yet the dancers are as much actors on stage as they are anything else. They play out a number of absurd scenarios fraught with metaphorical significance.

In one scene, a game of “hot hands” turns violent when one of the participants gets carried away and starts smacking the other one all over her body. In another instance, a performer comes center stage facing the audience and starts singing gibberish. The others approach her one by one calling her stupid and telling her to shut up. Scenes like these make the show feel at times like an exercise in awkwardness.

Choreographic choices, it appears, were given over to his dancers as they perform frantic mockeries of their own specialties. The dancers are all too willing to laugh at themselves and the business of dance, which puts so much pressure on being beautiful and graceful. Intermixed with such scenes is Roussève walking across stage at such an impossibly slow pace that it takes him nearly an hour and a half, the entire length of the show. He speaks periodically in a number of voices including those of an ex-slave named Sally, a survivor of Katrina and his own grandmother. His body contorts to become them and occasionally movements erupt spontaneously as they tell their stories. Roussève is more interested in the authentic movement of emotion than any well-practiced dance technique.

The questions he poses about the meaning of life are answered not in words, but by the mysterious and sudden impulse to movement. The ensemble brilliantly conveys the unquenchable thirst for expression through movement despite the worst of circumstances and limitations. As protagonist of his own piece, Roussève is enthralled to share this discovery.

“Saudade,” as much theater as dance, sustains amusement and curiosity but is at times a victim of its own many devices. The mayhem, which ensues on stage, coupled with technical gimmicks like film projections too often distract from a clear articulation of ideas. Yet, those that do come across pack a mean punch.