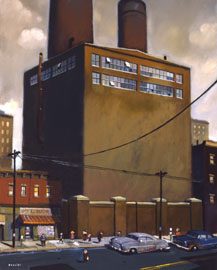 It’s like Zach Braff’s Garden State with the "Look Ma, no hands!" hip soundtrack removed, replaced by Billy Joel tunes a la "Allentown." Artist John Puglisi’s "The Garden State" returns to the industrial roots of New Jersey with a landscape that includes nothing even remotely as pretty as Natalie Portman.

Not particularly interested in working on an assembly line and unable to – as countless movies have shown us – "get out" via sports (God, don’t any of these people have cars?), Puglisi turned to illustration, receiving a BFA in illustration, and settling in Southern California.

As with most artists that exhibit at La Luz, Puglisi has contributed artwork to Disney, Universal, Industrial Light and Magic and 20th Century Fox, all of which culminated in his directorial debut on an episode of the animated TV series "Father of the Pride."

Looking at "The Garden State," one can see why Puglisi is so coveted by the animation studios. In an era where it’s only a matter of time before Toilet Story comes out – replete with talking plungers and a wise-ass loofa – Puglisi can infuse inanimate objects – train stations, bus stops, power plants and turnpikes – with their own characterization.

Take along a CD of the greatest hits of Billy Joel and Bruce Springsteen and listen on your iPod as you wander through this exhibit – Puglisi also seems to infuse the inanimate words of these master-storytellers’ songs.

P.S. The exhibit itself is dedicated to the people who still live and work in New Jersey. A reception for the artist will be held at the exhibit’s opening on Friday, May 6 from 8 p.m.-11 p.m.