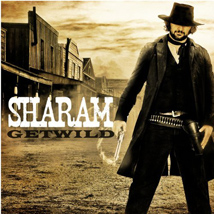 Sharam is one-half of DJ duo Deep Dish, and although he is widely known for his contribution to dance music, he has not put out his own album until now. Get Wild begins with an eerie instrumental (“The Wild Theme”) that sounds like something out of a spaghetti western. The song is a great set-up for what immediately follows; the ’60s pop and hip-hop mash-up of “She Came Along” featuring Kid Cudi.

Sharam puts the cinematic experimentation aside and heads to more familiar territory – the dance floor – for most of the album though, beginning with a deep house groove called “Don’t Say a Word” that showcases the sultry vocal work of indie singer Anousheh Khalili. Lots of other guests grace Get Wild too; Tommy Lee takes a turn at piano on “Sweat,” Daniel Bedingfield sings on “The One” and Diddy joins the fun for a remake of Eddie Murphy’s “Party All the Time,” here called “Patt with Diddy.”

Sharam wraps up Get Wild with more western imagery as twangy guitar and a mid-tempo beat face off at high noon on the instrumental “Once Upon a Time in the West.”

Get Wild is currently available.