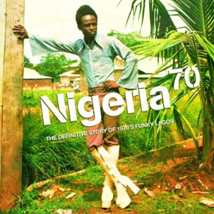 If you’ve had the chance to see Seun Kuti’s recent tour or check out a documentary like the oddly funny Ginger Baker in Africa, you might have developed a hunch that music is (or was) a bit more loose and free in West Africa, able to convey a message, sure, but more direct than poetic, never taking away from the rhythm itself.

“Don’t bring bullshit to Africa,” then, is the new “Enjoy yourself/you no know today you could die.” Perhaps it’s the way such simple statements get made with honest fire over the scratch of funky guitars and imperfectly tuned brass, but there’s an authoritative voice that separates the authentic stuff from American imitators like Ann Arbor’s Nomo or Brooklyn’s Antibalas. If “La La La” sounds familiar, in fact, it’s likely that you’ve run across a 2004 cover by Nomo; the included version, though, live and thus more spontaneous, with call-and-response sing-along, finds Segun Bucknor confidently calling out, shaking, echoing over brass.

If there’s any disappointment with Nigeria 70, it’s the overlap of tracks with Luaka Bop’s Love’s a Real Thing from 2005 (which actually makes the Luaka Bop comp the disappointment, as this one’s a remastered version of a 2001 release). Surely there were more songs to choose from?

There’s repetition of Tunji Oyelana & the Benders doing “Ifa,” and “Allah Wakbarr” by Ofo & the Black Company. But who could blame the labels for wanting to include them?