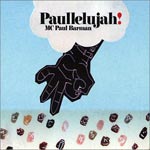 Dorks like myself, rolling around in the sticky muck of academia and alternative culture, squeal with glee and fog up their glasses every time they hear the over-intellectual rhymes of MC Paul Barman. The self-described "Jewish dork" from New Jersey's first full-length release fully satisfies every urge I have for books n' beats with lyrics such as "I'm iller than the Iliad," "Someone can tzuck my Tzadik," and "I keep it more Gully than Jonathan Livingston." And for my sexier moments, there's such catchy word play as "Winona Ryder/Goin' inside 'er" and "Slip my slim sword in/Kim Gordon."

But an album of pure cerebral (and otherwise) humor is nothing better than a "Weird Al" Yankovic record. Paullelujah, however, is produced by hip-hop legend Prince Paul, who recognizes the irony inherent in Barman's raps and translates that into mock-epic string sections and choir ensembles that sing "Paullelujah" with overwrought devotion. But along with silly sound collages and facetious musical drama comes honest-to-God great beats, scratching, cross rhythms, and funk samples which give real hip-hop legitimacy to this album, which might have otherwise been easily dismissed as smarty pants white-boy stuff. Barman also helps to keep things diverse by working in a few tracks of folk-country and beatnik-style spoken word.

While the lyrical appeal begins to recede after the first few listens (like a CD of stand-up comedy, the jokes don’t hold up to repeat spins), but the production value keeps the material fresh. This release might just be the one that moves Barman out of the lonely hearts of nerds like me and into the open arms of musical stardom. Grade: A-