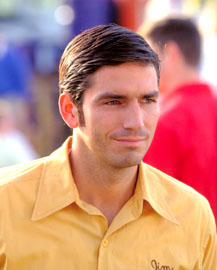 Sink or finish. Explode or win. Defeat or glory. In this true story, for the townspeople of Madison, Ind., life rests on the sleek hull of their community-owned hydroplane race boat, the Miss Madison.

In 1971, when the waterway transport industry had all but collapsed, the tiny hamlet of Madison lay dying on the edges of the Ohio River. In a desperate attempt to revitalize their stagnant economy, former racer Jim McCormick and the crew of the Miss Madison won the right to host the Gold Cup, hydroplane racing’s most prestigious event, in Madison, the little town that dreamed big.

The rolling farmlands and hardworking folks of Indiana have appeared in their fair share of inspirational sports movies, and director and Indiana native William Bindley was initially hesitant to begin the project.

"If you work in Hollywood," he says, "you’ll get a call once a week from somebody with some sports miracle story." His interest piqued by a call from a Madison resident, however, and Bindley traveled to the town and interviewed McCormick about his racing past.

In the plight of the townspeople struggling to survive the industrial decay of their once-proud community, Bindley found the engaging, humanistic conflict for his film.

"If you have grown up in a town and you’ve had generations and generations of people who’ve lived in this town, and now it’s pretty much sinking, do you stay and fight for that town and for your roots, or do you split for Cincinnati or Indianapolis and take the job?" Bindley asks.

The actual production of Madison, echoing the trials of its titular community, remained the perpetual underdog.

"At the end of the day we were lucky to make it happen," says actor Jim Caviezel. "I gave my salary up for this film because we ran out of money. We were continually trying to make these boats float, and they were just killing us. You have a story about a guy trying to keep a boat floating, and then you have a film crew running around trying to do the same thing."

As art imitates life, the cast and crew also experienced the danger of speedboat racing firsthand in their attempts to realistically recreate the excitement and tension of competition.

"This, by and far, was the most dangerous thing I’ve ever done in my life," Caviezel says of his role as McCormick, because "it’s not just being in a race car, it’s being in a wake. If the water changes – just a little tiny wake – it will make that boat just go airborne. If the driver doesn’t get out of the boat in time, he gets crushed to death."

Even more frightening, during his pre-filming research, Caviezel says he was startled to learn that over 90 percent of all of the greatest race boat drivers went into the Hall of Fame dead, having been killed during their careers.

To avoid his untimely demise and to ensure an authentic feel for the action sequences, Caviezel said that personal research was essential. In Madison, "there was a tavern, [and] I hung out with the drivers a lot and talked to them. There was a lot I had to learn, especially about the engines and the respect for what they do, and respect for the boat," he says.

Indeed, Caviezel says that one of the most satisfying aspects of working on this smaller film was the closeness of his connection with the town. From the ex-drivers who helped him learn to pilot the boats to the late Jim McCormick’s wife Bonnie and son Mike, Caviezel says that his short time in the town of Madison remains unforgettable.

"I always say that I’m never going to make one more film than I’m supposed to make. I’m as proud of this film as anything I’ve done; I’m just glad that it’s able to be seen."